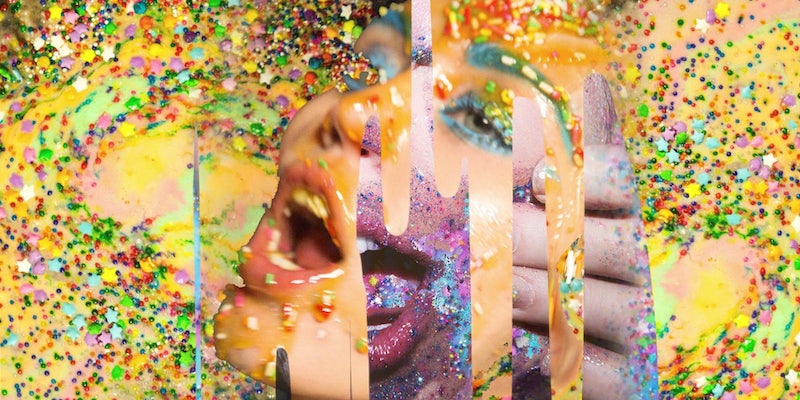 A portrait of the artist as a young devil-may-care voice of a generation.

Miley Cyrus did a decent job of being her own technicolor variety show at the VMAs Sunday night, but it was really just one big billboard for her new album, Miley Cyrus & Her Dead Petz.

The 23-song album, the majority of which was co-produced with the Flaming Lips, pivots quite a bit from the pop and rap posturing of Bangerz. Opener “Dooo It” finds a groove in the atmospherics, “Karen Don’t Be Sad” has shades of the Flaming Lips’s “Yoshimi Battles the Pink Robots,” and “The Floyd Song (Sunrise)” is a tear-stained psychedelic ode to a dead pet. As an opening trinity, it establishes Dead Petz as a Flaming Lips album, but it doesn’t set the tone.

At 23 songs, there’s certainly fat that could have been excised; there are some half-finished ideas and indulgent excursions. Most of the songs were co-written with the Flaming Lips’s Wayne Coyne and Steven Drozd and Coyne’s nephew Dennis. The first three songs on Dead Petz mirror that influence, but deeper in the album, Cyrus starts digging out a more vibrant, experimental ditch: “Lighter,” “Cyrus Skies,” “Milky Milky Milk.”

Cyrus expanded on her friendship with Flaming Lips frontman Wayne Coyne in a New York Times interview, saying she believes her deceased dog’s energy was transferred to Coyne after she went to a Chinese healer.

I really think, in a way, his energy went into Wayne’s energy. What he was to me, Wayne has become.

Coyne’s sticky fingerprints are all over Dead Petz, which could have been disastrous, but the album mostly amplifies both artists’ better features. There’s no brain-cleaving power ballad like “Wrecking Ball,” but the 22-year-old is in a position where she doesn’t necessarily have to push out another one. Cyrus remarked on her creative freedom in the NYT piece, explaining that her advisers “said they’d never seen someone at my level, especially a woman, have this much freedom. I literally can do whatever I want. It’s insane.”

We’ll see what literally doing whatever she wants yields, but Dead Petz, an album released outside her RCA Records contract, is essentially Cyrus’s transference of energy, an impulse-driven exploration of emotional extremes and musical accompaniment to her new role as generational adviser: smoke drugs, explore your gender and sexuality, embrace loss, and generally do you (just maybe don’t call out Nicki Minaj).

On closer “Twinkle Song,” she offers, perhaps, a new generational mantra: “I had a dream that I didn’t give a fuck. But I give a fuck.”