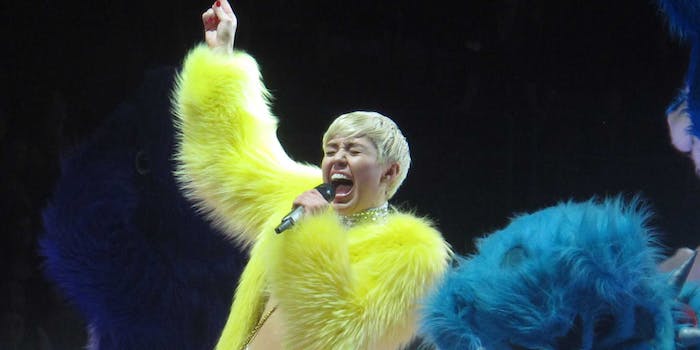 This makes her Bangerz album title a little more disturbing to those familiar with British slang.

Miley Cyrus has taken yet another page out of the Honey Boo Boo playbook. This time it’s not peeing in the woods, but rather the adoption of a pint-sized piglet.

During the pop star’s recent animal-adoption spree, a mini pig somehow entered into the mix and has now found a home cuddled against the breast of the Bangerz auteur. Cyrus posted a picture late Sunday night to Instagram, introducing the animal as the “newest member to the fam.”

The short stack of bacon, affectionately named Bubba Sue, began trending soon after the proud new mother began blowing up Instagram with pictures of the pig cozied up to her on a private jet with cloven hoofs painted red.

As a crescendo to her adorable Instagramming spree, Cyrus posted a photo herself, Bubba Sue, and the other latest addition to Cyrus’ tiny animal famliy, a mini Sheltie named Emu.

Art historians everywhere have almost assuredly begun clamoring over the photo, declaring the image of Cyrus and her animal family a modern Madonna.