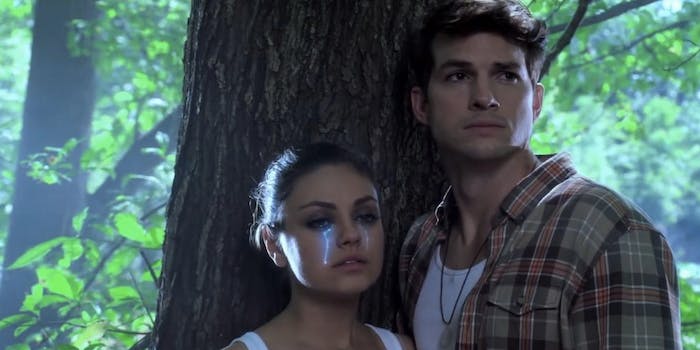 Well, this is a movie that should never, ever be made.

On Saturday (Dec. 13), a ridiculously weird trailer for a mysterious movie called “MoonQuake Lake” starring That 70s Show alums Mila Kunis and Ashton Kutcher hit the Web. The thing is, it’s a totally fake movie—thank goodness—that is featured in a scene in the upcoming Annie remake.

The fictional MoonQuake Lake—which has a hilarious website to go along with its trailer—stars Andrea Alvin (Kunis) and Simon Goodspeed (Kutcher) and seems to be about the Twilight-esque couple and their seriously creepy moon obsession.

In the above clip, Kunis cries translucent blue tears, Kutcher talks about catching Kunis if an asteroid hits them, and Rihanna tells the couple, “It’s time.” (Yes, the super famous singer is most definitely in the trailer as some bizarre creature with razor teeth.)

Basically, it’s just one of the most confusing trailers ever. Fortunately, fans can rest easy knowing that it’s not actually being made … or is it?