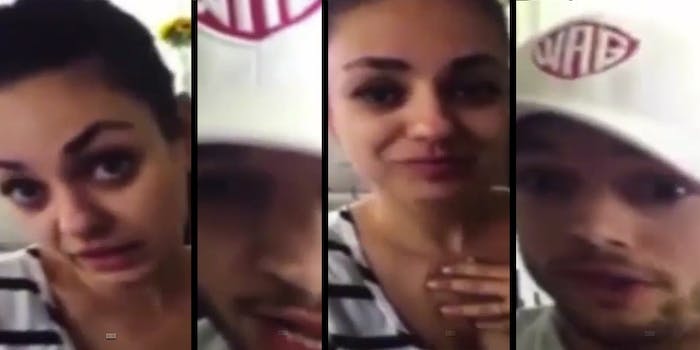 Screengrab via NEWS24/YouTube/Remix by Joey Keeton

Mila Kunis is being sued for stealing a chicken 25 years ago, and now she’s firing back

They don't seem too distressed about the $5K lawsuit.

When TMZ broke the story yesterday of Mila Kunis being sued for stealing a chicken from an alleged best friend in the Ukraine 25 years ago, it felt like Christmas. It’s not often that a celebrity story this simultaneously silly and harmless hits the interwebs—the chicken’s name was “Doggie,” for crying out loud—and it’s all so farcical that you can’t even get mad at TMZ for mocking the plaintiff, Kristina Karo, into oblivion:

Kunis, along with Ashton Kutcher, has now fired back at Karo’s claims that Doggie was stolen all those years ago. Aside from the fact that they’re both doing well enough financially that a $5,000 suit is unlikely to put the fear of God into them, they didn’t seem to take the matter too seriously at all when they held their livestreamed response on the social media network Meerkat (which Kutcher is heavily invested in):

Evidently, Kunis has not actually been served for the lawsuit yet, which raises the question of whether or not the lawsuit even really exists. The couple also does a little math in the video, and figures out that Kunis was 7 years old, while Karo was merely 1 month old, at the time of the alleged chicken theft, which makes the allegations sound fairly far-fetched.

Kunis also jokes that she’s considering filing a lawsuit of her own for damages caused by watching Karo’s music video. “My body hurts. My eyes hurt—they’re burning. That requires money,” she says. Kutcher speculates on the suspicious convenience of this wacky lawsuit coinciding with the release of said video, which you can hurt yourself with by watching here:

We have to agree with TMZ: “If the judge would make the countersuit a class action, we’ll gladly join.”

This entire situation is so insane that we’re expecting Karo to ink a deal for her own reality show within the next few weeks. And the worst part? We’d totally watch that show.