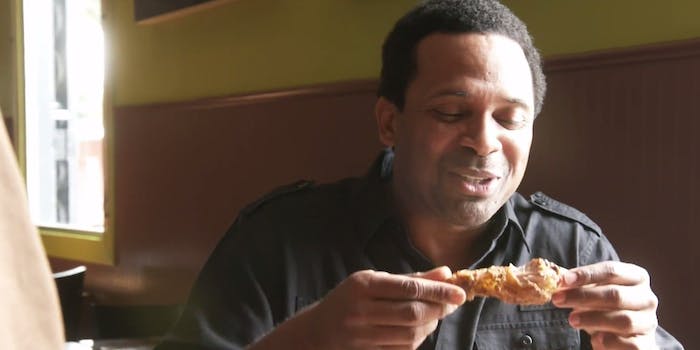 ‘That’s Racist’ explores jokes and stereotypes, for better or worse

Is Mike Epps having too much fun with the source material?

Mike Epps may not seem like the first choice to help us negotiate the tricky world of political correctness. And in That’s Racist (the final five episodes of which will be released on March 2nd) his AOL Originals webseries dealing with racist jokes and stereotypes, he lays his cards on the table early—”are we going to offend some people? Hell yeah!”—before launching, with glee, into the aforementioned gags:

“How do you blindfold an Asian woman? With a steering wheel.” “Why did the chicken cross the road? Because two black guys were chasing him with biscuits.” Why did the Jews wander the desert for 40 years? Someone lost a quarter.”

For what is supposed to be a semi-serious investigation into the origins of these sort of racist slights, Epps just seems to have too much fun with the source material. And that’s what these jokes seem to be to him: material. Sure he occasionally checks himself with a post-emptive “oh, that’s f**ked up,” but this is accompanied by the beaming smile of a man clearly enjoying himself.

And it’s not only Epps who gets in on the fun. Randy and Jason Sklar, Helen Hong, Rick Overton, John Viener, and Sharon Houston form a sort of roundtable of jesters, who, vaguely picking up on the theme of the series, seize the opportunity to air all those race cracks that kids used to pass around the playground in fourth grade.

What it causes is a strange dynamic where the comedians jostle for their airtime in competition with actual academics and religious leaders who legitimately have something to contribute to the topic. So you have passages in the series such as where Prof. Marcia Dawkins of USC’s summation of fried chicken’s correlation with slavery and Prof. Pete McGraw of UC-Boulder’s demonstration of how fried food and poultry is a lower status food bookend Epps expressing his “amazement” at a group of white people who are eating chicken “with only one black guy.”

This is not a question of whether these jokes are funny. Nor does this issue have to be approached with the utmost gravity. But if the host of the program clearly finds no problem with the jokes themselves, then why is he bothering to interrogate them? It makes the purported motivation behind this series appear false, and when a group of people laugh at how “racist” something is, it seriously undermines the inherent power of the term. There is something to be said about demystifying racial boundaries through humor, but most of the laughs here just feel like opportunistic troublemaking under the guise of “discussion.”