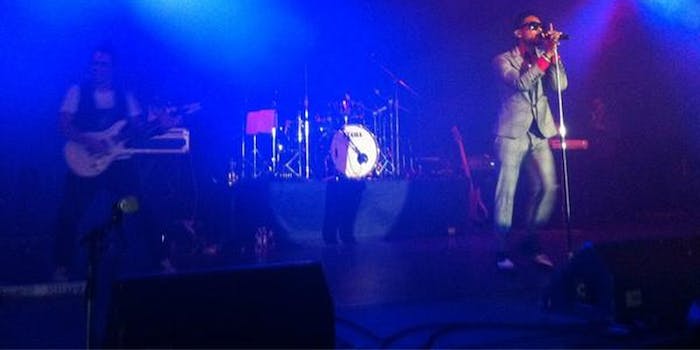 The Morning GIF: Miguel, his crotch, and the WWE

Landing on a fan wasn't part of the plan, but that didn't seem to stop Miguel from finishing his performance Sunday night.

Miguel should have just stuck to singing and left the WWE moves to the professionals.

During his performance of “Adorn” Sunday night at the Billboard Music Awards, the 27-year-old American singer leaped into the air and performed what looked like the Bronco Buster, the signature move from WWE wrestler X-Pac. Miguel was attempting to leap over the audience to the catwalk, but instead, he ended up landing crotch first on top of some fans, leaving at least one person bruised. One woman who got a faceful of Miguel’s man region “ended up pinned on the catwalk by the singer’s right leg,” the New York Post reported.

“She appeared to quickly shake off the unforeseen foulup, brushing back her hair and stepping away from the stage,” the newspaper added.

The Bronco Buster is nothing to mess with. In March famed WWE wrestler X-Pac was performing the move at a tribute show when he accidentally tore his anus.

After the Billboard performance, Miguel consoled one of the injured fans backstage as she held an ice pack over her arm.

“Well, I think it’s kind of clear what happened,” Miguel told Billboard. “But I’m very happy to bring my new friend, Khyati, we just met. Unfortunately we did not meet under the best circumstances, but I think we’re okay.”