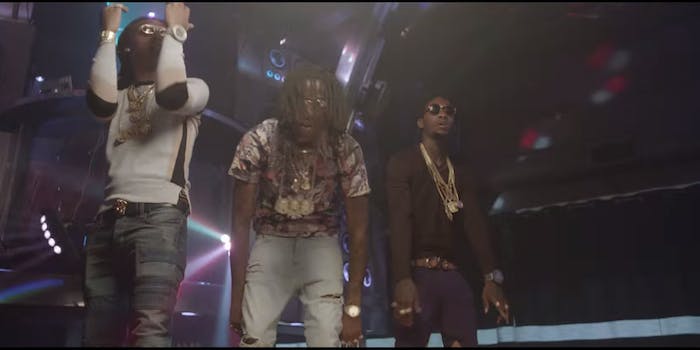 Atlanta's Migos just dropped one of the biggest rap albums of 2014—and it's free.

For the uninitiated: The Atlanta hip-hop trio—rappers Quavo, Takeoff, and Offset—terrorized the genre with summer 2013’s Drake-approved smash, “ Versace.” With one noun, the group created a unique rallying cry for any rap fan that’s tired of puritans ruining all of the fun. “Versace” was such a ravenous, subversive track (because it’s about flexing hard but carries an unmistakable new money, we’re-in-the-building tone) that a September 2013 fashion show in Milan from Donatella Versace closed by spinning the song.

Its new tape, Rich N***a Timeline, is more or less about the following:

The 18-track mixtape lightly touches on the backstory (our heroes saw cocaine bricks at age 18, shot a gun at 19, obtained gold at 20), and barks booty endorsements over heavy instrumentals: “She make me wanna have a million babies.” Opener “Cross The Country” is wild because it’s six minutes long and each member raps twice as much as the average rapper does per verse (16 measures). There’s Luol Deng and George Forman grill namechecks, dark whims sold on delivery (“I might pull up with that chopper and extension”), and ‘hood escapism like “I’m thinking of moving to Babylon.” It’s beautiful work.

The Migos tape is a flippant alternative to last month’s Run the Jewels 2 record from veteran professors, El-P and Killer Mike. Jewels is made for 35-year-old developers with iPhone 6s—there’s raps about The Beatles, comets, Hobbits, Quentin Tarantino, and dick jokes. At one point, the not-African-American El-P has the nerve to piggyback Killer Mike’s powerful verse on “Early,” a song about police brutality, with some raps of his own.

More importantly Jewels exists to critique rap tropes it sees as institutionally damaging while borrowing the notion of self-actualizing swagger. All of the language lands like a stern hall monitor lecture. Pitchfork wrote a cover story about it called “Last Rappers Standing,” the son of Wilco’s singer liked it.

Migos is higher art. It’s original and expansive. You can sit in traffic to it and be serene. There’s more than meets the eye: As Brandon Soderberg pointed out last year, they “have a way of injecting some truth into their songs by way of, say, numerous tone-shifting references to the tragedy of Hurricane Katrina. (Or consider their initial street hit, “Bando,” which was about selling drugs out of abandoned and/or foreclosed homes.)”

As a feel good reactionary power play, it’s been a fun day of adorning the trio with irresponsible superlatives.

When you accidentally close the tab you were streaming the new Migos from pic.twitter.com/ZRoUof6FUu

Please explain to me how Wu Tang is better than Migos. I’ll wait.

Migos eclipsed the Jackson 5 with this mixtape

They got 3 Beyoncés RT @ChinksMcGee: If Quavo is the Beyonce of Migos, who is Michelle? Hmmmm

Just another day on the “Nawfside.” Download and stream the mixtape below.