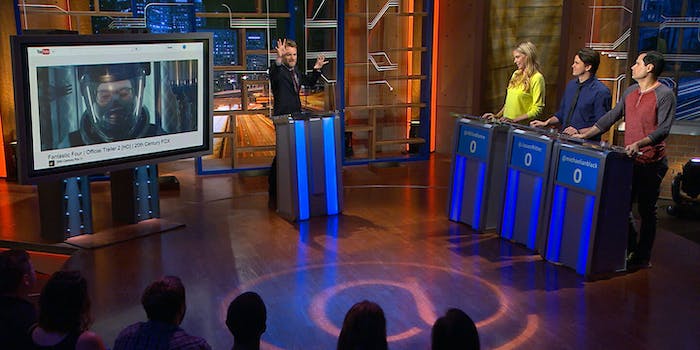 How @midnight managed to win the Internet by celebrating it

'The audience participation is a critical thing.'

At a recent taping of @midnight, comedians Heather Anne Campbell, Jon Daly, and James Adomian riffed on what kind of toast they would give at Taco Bell’s new high-end, alcohol-serving cantinas.

“I’d like to thank you all for attending this funeral,” Daly deadpanned. “Kid Rock was a good man. You’re now welcome to approach the casket. Just don’t hit your nose on the sneezeguard.”

Campbell’s toast ended in a dramatic pratfall and Adomian, who performed as Bernie Sanders for the entirety of the show, called for fast food workers to make $15 per hour. The crowd cheered loudly for this. Between segments, the comedians and host Chris Hardwick joked around with each other.

Fresh off its Emmy win for Outstanding Achievement in Interactive Media, @midnight is changing the way we watch television. In an era where we livetweet anything from the latest episode of Scandal to village rebellions in China, @midnight takes the best, worst, and weirdest of the Internet and challenges three comedians to come up with the best jokes. Hardwick assigns sometimes-arbitrary points to the funniest ones. It’s a far less dorky millennial version of Whose Line Is It Anyway?

When @midnight first hit Comedy Central in 2013, former Daily Dot writer Gaby Dunn asked whether it was possible to “take an Internet audience back to TV with a game show about Web culture.” In 2015, @midnight is the third most-watched talk show with viewers ages 18-34, falling behind The Tonight Show and The Daily Show. That’s an incredible achievement considering how young the program is.

In perhaps the show’s most popular game, Hashtag Wars, panelists generate phrases based on a hashtag theme like “#OneLetterOffSongs” or “#SexyStarWars.” Viewers are invited to tweet their funniest ideas from home, and the best tweets are sometimes broadcast on the show the following night.

“The joy of the show is seeing people come up with something faster than I ever could,” executive producer Joe Farrell told the Daily Dot after the taping. @midnight is shot in Hollywood in front of a small crowd, on the iconic set that I Love Lucy was once filmed on. The studio audience plays an active role in the show, ultimately deciding which comedian “wins the Internet.”

“The audience participation is a critical thing,” Farrell said. “I think it’s both a critical part of the Internet and comedy on the Internet for the show to be democratic in that way.”

The studio audience serves to mimic the sometimes chaotic, always democratic nature of the Internet. When asked why interactivity is central to the show, Farrell said, “What we try and do is mimic the patterns of people on the Internet. Our most popular things are games and trends we feel fit into people’s daily Internet consumption. Without the fans who send us stuff, our show would not exist.

“As Pollyanna as it might sound, we’re trying to celebrate the Internet.”

Of course, in the era of meme aggregation and joke theft, @midnight makes it a priority to credit all the websites and Internet users they feature on the show. “We want to give credit,” Farrell said. “We get their handle right. We get their picture right. It’s not so much that we’re afraid, it’s that it’s so fun to get an email from someone who is so excited they got on the show.”

“There is a certain fluency with the Internet that our show demands,” co-creator and executive producer Jason Nadler said. “Funny is funny, but Internet humor needs to have its own special shine to it. That’s not to say they need to have a huge Twitter following or be kings of Instagram. That’s not important as much as being able to filter that stuff through a comedic lens.”

Ultimately, @midnight is a game show, so much of it is improvised. “We have the best comedians in the world on our show,” Farrell said. “They definitely work with our writers but it’s not like they are highly scripted.”

Although the Internet can sometimes be a harsh place, @midnight takes the most absurd moments and spins it into nice-guy comedy—which has been called out by others in late night. “Chris is incredibly talented as a host,” Nadler gushed. “His on-the-fly chops are pretty much unrivaled.”

At the taping, while Hardwick was reading from the teleprompter, he skipped a joke, calmly saying, “That’s mean. I’m not saying that.”

Although some would deem this sort of comedy soft, that spirit lives on in the show, and has shaped @midnight into what it is now.