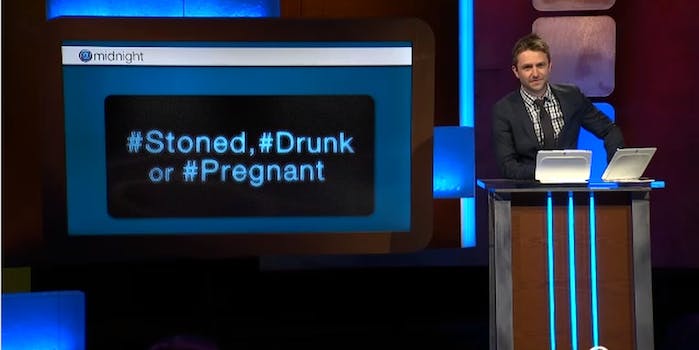 Can a game show about the Web actually work on TV?

@Midnight is striving to do the impossible: take an Internet audience back to TV with a game show about Web culture. And so far, it’s actually working.

Hosted by Nerdist kingpin Chris Hardwick and produced by Funny or Die, the Comedy Central program mines the best aspects of the Web—memedom, YouTube’s virality, celebrity Twitter, and podcast’s topicality—and turns them into a contest where, unlike Klout, the points actually do kind of matter. It’s like Who’s Line Is it Anyway? but for the Tumblr crowd.

The show features three comedians or celebrities competing on a Jeopardy-style set in different categories of recent Internet knowledge.

At the taping last Tuesday the contestants were YouTube star Grace Helbig, Daily Show correspondent and podcaster John Hodgman, and standup comedian Kurt Braunohler, and at one point, they had to guess whether an obscured item in the background of regular people’s Instagram photos was “creepy” or “cute?” One shot turned out to be a man dressed as Donald Duck hidden in a shot of a strip club.


Like the Internet, the show moves quickly to stay relevant. The goal’s to stay current despite the six-hour span between when the show finishes taping and when it airs at midnight. But on the Internet, six hours is like 60 years: a lot can happen. So writers often update information throughout the taping, rewriting on the spot, an act that allows the show to reference a meme that broke online that day or include an inane celebrity tweet from that morning.

@Midnight tapes Monday through Thursday in Hollywood and only takes an hour to finish. Hardwick mugs for the audience, doing bits in-between filming. Comedian Brody Stevens does a great job keeping the intimate studio entertained. Attendees can often meet the show’s guests outside afterward. It’s all very fun and interactive.

It helps that @midnight, as its name suggests, is super active on Twitter. The show’s interactive hashtag game, in particular, has flooded feeds with comedians and regular people vying to get a tweet shown on TV by tweeting @midnight. In doing so, viewers, and the show’s guests, take what they learned from the Web that day, and add to it, rather than just regurgitate it.


@Midnight’s success in the past month’s trial period might be the answer to television’s ever-failing ratings—Business Insider just named 2013 “the worst year for TV” in terms of ratings—and the prominence of online streaming sites like Netflix, Hulu Plus, and Amazon Prime.

It’s inexpensive, appeals to a young male demographic, and like Key and Peele’s videos and segments of Daily Show with Jon Stewart and the Colbert Report, which @midnight follows, it plays well both on air and online. Last week, Comedy Central gave the show a 40-week pickup based on its immediate popularity.

“We’re amazed at how quickly ‘@midnight’ has resonated with our fans,” Comedy Central’s Kent Alterman told Deadline Hollywood. He cheekily added: “If the Internet catches on and social media becomes a part of pop culture, we think we’ll really have something here.”

Isn’t Comedy Central just taking parts of the Internet—free content created by others funnier than the company itself—and repackaging it for a profit on TV? Yes. And it’s surprisingly entertaining.