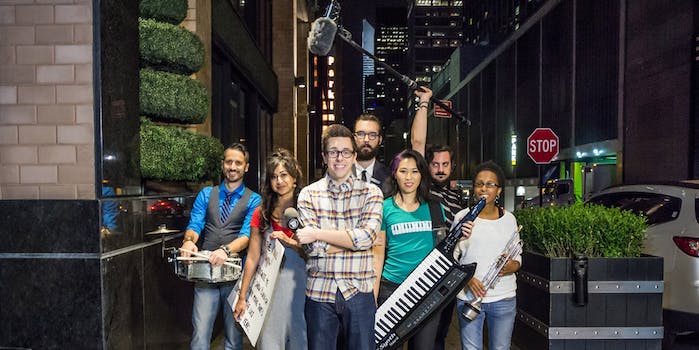 'By signing on to do our show, you know that you have to be up for crazy things to happen.'

Middle of the Night Show, one of CollegeHumor’s two new shows airing on cable this season, has a simple premise: Brian “Murph” Murphy co-hosts a talk show with a different celebrity every week. The catch: As you may have predicted from the title, Murphy and his crew surprise their celebrity guest host by pulling them out of their slumber.

MOTNS is part of CollegeHumor’s transition from being a Web-based company to producing television. Sam Reich, who runs video at CollegeHumor and is an executive producer on the show, says the website has become a “boot camp for comedy writers,” with alumni writing for Saturday Night Live, Last Week Tonight, and The Daily Show.

The show, which airs Thursdays at 11pm ET on MTV, relies on the same gimmicks as any other late-night show, setting up bizarre challenges for Murphy and his guest host that manage to, if nothing else, thoroughly entertain.

In the first episode, Murphy plays a game called Who’s in Your Bed? with Silicon Valley’s Thomas Middleditch. Although the premise of the game is lackluster, as most talk show games are, you can’t help but have fun watching Middleditch, who is naked under the covers, squirm a little bit.

“By signing on to do our show, you know that you have to be up for crazy things to happen,” Murphy told the Daily Dot. “So when we wake our guest host up it’s much less somebody freaking out that there’s an intruder in their hotel and more like, ‘Oh, you got me!’”

Last month, there was a bit of controversy around MOTNS, after the creators of another talk show, What’s Going On?, accused MTV and CollegeHumor of stealing the idea. Reich responded on Facebook to assure fans that the shows were completely different. Both Murphy and Reich maintain that the show is authentic.

“I mean it’s more of a surprise party than busting in on someone sleeping,” Murphy said.

“New York at four o’clock in the morning is something between a theme park and a haunted house,” Reich said. “Its energy is important to the show. It can also be very scary.”

Throughout the season, there are a variety of different guest hosts: Adam Pally, Jordin Sparks, WWE wrestler The Miz, and Waka Flocka Flame. “It’s definitely different working with comedians versus non-comedians,” Murphy said. “I’d say with Thomas [Middleditch] and Adam Pally you need to do things that are a little weirder to throw them off because comedians have seen and said everything.”

Of all the guests, Murphy was most excited to work with The Miz, as he’s a huge wrestling fan. “It was sort of a way for me to insert wrestling jokes and weird things that otherwise no one would let me do,” he said.

“It’s a weirdly nerdy thing,” Murphy said when asked about wrestling. “If a few years ago somebody would’ve asked me, ‘What are wrestling fans like?’ you’d think jocks or something. But as you’re around more comedians you realize it’s Dungeons and Dragons, but with men in Speedos.”

Murphy was also excited about working with rapper Waka Flocka Flame. “He has the craziest change over the entire episode because in the bedroom he’s so low energy and kinda out of it,” he said. “He reads the first cue card while still tilted over as he’s not quite sure what’s going on. …By the end, he’s so competitive. …We play a game called No Hands Basketball and he’s yelling. It’s cool to see that the enthusiasm of the show is contagious.”

In another bit in the first episode, Murphy asks people in a sex shop about their purchases. “I don’t understand why anyone would go into a sex shop and be down to be on camera, but people are generally pretty down for it,” Murphy said.

When asked about whether any of his man-on-the-street bits ever got exploitative, Murphy asserted, “We always try to do something where we’re the ones looking stupid.”

MOTNS is part of a larger trend of light, kind-hearted comedy. Apolitical and deeply inoffensive, the show entertains because Murphy and his guest’s enthusiasm rub off on the viewer. In the episode where Jordin Sparks co-hosts, we see her start to freak out as SPAM is presented to her during a game called Mystery Midnight Snack. It’s a famous person overreacting to gross food, but it’s still fun to watch her genuinely react.

“I think people realize that you don’t have to be an insult comic or something to make people laugh,” Murphy said. “It’s less awkward for me if I’m being nice to people and I’m not ambushing people. I don’t want to shove a camera in somebody’s face… and after the camera stops running say, ‘Thanks a lot, man.’ I don’t want to be fake like that. I’d rather just have them psyched to be a part of the show.”

MOTNS relies on gimmicks, so like every other late-night show, it’s perfect to watch as you zone out or doze off to sleep. It’ll briefly light up your evening, and then you’ll proceed to forget what you watched.