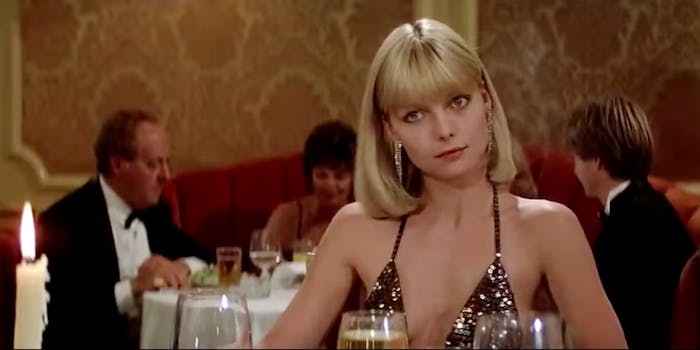 The moderator asked Michelle Pfieffer about her weight—and the audience was not thrilled.

The stars and director of Scarface commemorated the film’s 35th anniversary on Thursday night with a Q&A session at the Tribeca Film Festival. But some of the comments made from the stage were an unwelcome throwback to old-school sexism.

“As the father of a daughter, I am concerned with body image,” Kornbluth, who runs the blog Head Butler, said. “In the preparation for this film, what did you weigh?”

Kornbluth’s question was not received kindly by the audience, which responded with boos and a collective “No!”

The infamous moment at tonight’s #Scarface reunion panel where #MichellePfeiffer was asked by the moderator (who apparently is “the father of a daughter”) how much she weighed during filming, which was followed by a mixture of confusion and disdain from the audience. #Tribeca2018 pic.twitter.com/xQUQ6FJqtC

“This is not the question you think it is,” Kornbluth said to the audience. But the damage had been done and some fans even took their disdain for his question to Twitter. Ironically, the festival had kicked off the evening before with a statement about female empowerment during the premiere of a Gilda Radner documentary, according to Deadline.

The SCARFACE moderator just “as the father of a daughter”-ed Michelle Pfeiffer and then asked her how much she weighed before she started filming and half the audience yelled “NOO NOOO NOOO!” #Tribeca2018

The moderator at the SCARFACE reunion just asked Michelle Pfeiffer what she weighed during the making of it because he’s a “concerned parent of a girl.” The audience booed. #Tribeca2018

Oh hey just plugged in my camera and look: Michelle Pfeiffer reacting to the bad question, in three photos pic.twitter.com/BVHO9Pvqym

Bless every single audience member who booed at the moderator asking Michelle Pfeiffer what she weighed when filming SCARFACE, and hooray for Jason's pictures, especially the last one, where she looks like she's about to laugh that moderator off the stage. #Tribeca2018 https://t.co/CWoWA9wIRZ

After the crowd settled down, Pfeiffer actually responded to Kornbluth’s question.

“Well, OK … I don’t know. But I was playing a cocaine addict,” she said. “As the shoot went on, I tried to time it so I became more and more emaciated. The problem is, the movie went six months and the climactic scene kept getting delayed…The crew kept bringing me bagels because they were so worried about me. I think I was living on tomato soup and Marlboros.”

The awkwardness of the panel didn’t stop there, either. Steven Bauer, who played Manny, was reportedly noticeably very intoxicated on stage and eager to keep the spotlight on himself; he even cut off his castmates to answer questions that weren’t intended for him.

The part-Cuban actor also elicited some angry responses from the crowd when he defended the film against critics upset about its depiction of Latino and Cuban communities.