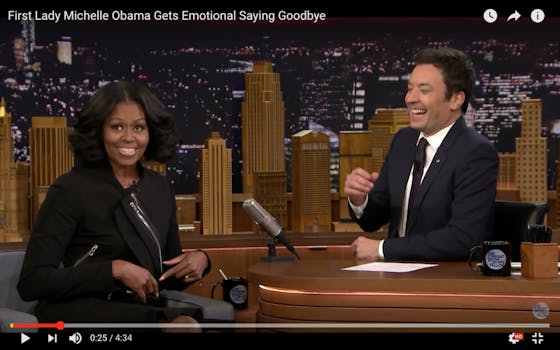 Come for Michelle Obama, stay for Stevie Wonder's tribute to her.

Breaking up is hard to do, especially when it is with someone as charming as Michelle Obama—just take it from Jimmy Fallon.

On Wednesday night, the first lady appeared on the Tonight Show with Jimmy Fallon—her last show as a resident of the White House. While the episode’s segments focused on Obama, Jerry Seinfeld, Dave Chappelle, and Stevie Wonder made guest appearances, too. Wonder even performed “Isn’t She Lovely,” and “My Cherie Amour” for Obama.

Obama started off her final episode as FLOTUS by surprising a handful of fans and supporters as they recorded goodbye messages for her. She hid behind a curtain just feet away, emerging while citizens were mid-musings.

Obama then went on to write a few of Fallon’s witty thank you notes, one of them to her husband Barack, her “silver fox.” Fallon even wrote one to Michelle, thanking her for giving “the right to bear arms” a whole new meaning, as exemplified by her toned triceps.

Through her Tonight Show exit interview, Obama thanked her mother for supporting her and Barack over the past eight years and discussed why she gets so emotional saying goodbye to the American people.

“When I think about the fact that some [kids] are afraid, you know, of what’s to come, I really…I don’t want them to be afraid. I want them to embrace the future and know that the world is getting better,” she told Fallon. “We have bumps in the road, we have ups and down, but I want our kids to move forward…with strength and with hope, and that’s what touches me.”

Obama also discussed her future after the White House, including continuing her role in bettering physical fitness and education for children, as well as advising future first lady Melania Trump and Ivanka Trump, just as Laura and Jenna Bush helped her.

Toward the end of the show, Obama, Fallon, Chappelle, and Seinfeld played a rousing game of Catchphrase, and Wonder sent Obama off with his sweet serenades.

View the rest of the clips from the episode here.