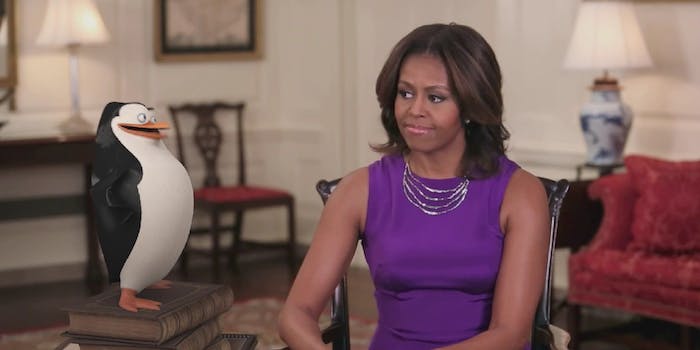 A day after her husband endured a politically grating night of net losses, First Lady Michelle Obama and nonprofit Got Your 6 released a light-hearted propaganda video. It features the penguins from Madagascar, and a great deal of banal talking points aimed at indoctrinating children. The Michelle-sanctioned penguins pick on the tiny, British penguin and go on to educate us about veterans. It’s charismatic, fluffy stuff.

In military terms, “got your six” means “I got your back”—picture two pilots flying, the one in the back is watching out for his colleague and is hovering at six ‘o clock. The nonprofit aims to dispel myths about the normalization process of post-service military members: mostly that the majority of our service men and women are coming home with deep-rooted psychological issues that will plague them as they try to re-enter the workforce and community. The organization considers this to be a misconception and it fights these stigmas by partnering with the film industry.