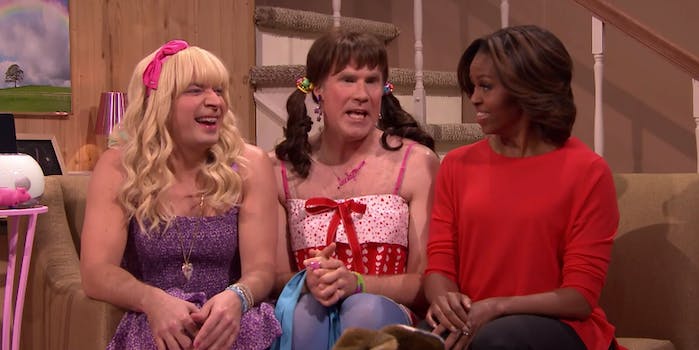 This is the dance party of our dreams.

Putting Jimmy Fallon in a sketch with fellow Saturday Night Live alum Will Ferrell and First Lady Michelle Obama is anything but ew.

In the midst of a star-studded first week on The Tonight Show, Fallon has pulled out the best of his Late Night variety sketches and has already done an “Evolution of Dancing” video, a barbershop quartet, and made Brian Williams rap yet again—and none of them was a Jimmy Kimmel hoax (that we know of). And Obama has already shown that she’s willing to go all-out for a Fallon sketch.

This time, Fallon and Obama recruited Thursday’s other guest for another rendition of “Ew!,” which featured Fallon and Ferrell dressed as teenage girls with an opinion on everything. The First Lady shows up and tries to change their views on exercise and kale chips while Ferrell makes out with his own headshot.

And who wouldn’t be giddy if given permission to call Mrs. Obama “Michelle”?