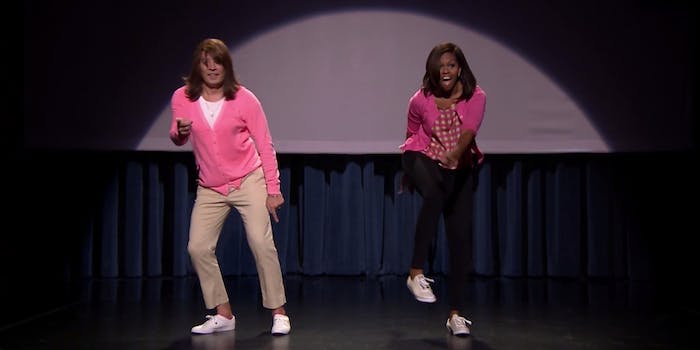 Just don’t ask her to do the 'Barack Obama.'

The First Lady has learned some new moves since the last time she put on her mom-dancing shoes.

Michelle Obama may be shielded from some modern music by her daughters, but that doesn’t stop her from shaking it with The Tonight Show‘s Jimmy Fallon to celebrate the fifth anniversary of Let’s Move. Plus, we’ve seen what she can do with a turnip. If it’s not the kind of dance move a mom would do at a wedding, then it’s at least something you’ve seen your parents pull off at home.

It doesn’t make it any less enjoyable, but you’d think Fallon would be able to keep up. Alas, he may be destined to always be one step behind at zumba class—unless he’s dancing as himself, of course.