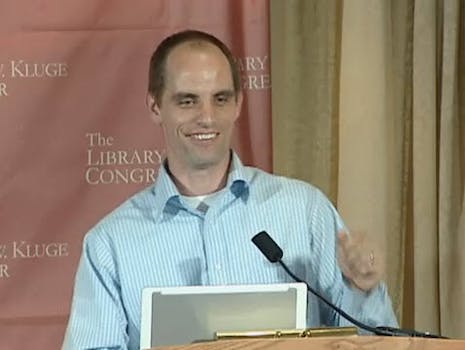 Once you dig beneath YouTube's surface, you find a community so complex and engaging that it requires professional analysis. Enter Michael Wesch, aka Professor YouTube.

Michael Wesch, a cultural anthropology professor at Kansas State University, wants you to rethink everything you know about YouTube.

He’s not just an academic: Wesch is a legitimate viral-video star in his own right. The second video Wesch ever posted, titled “The Machine is Us/ing Us,” went up against the Super Bowl in 2007—and despite that competition, was one of the most viewed clips that day. It went viral and has more than 11 million views to date.

But he’s also used YouTube in his research and teaching, posting clips like “An anthropological Introduction to YouTube.” YouTube officials even asked Wesch to come to its headquarters to deliver a lecture to employees. In essence, Wesch was invited to explain YouTube to itself.

And since then he’s made a career of exploring YouTube as a social and anthropological phenomenon.

The Daily Dot caught up with Wesch recently to explore YouTube’s deeper meaning.

It’s actually not so dissimilar from how other people get on YouTube. I needed to share a video with just a handful of people, in 2007. A few weeks later, [The Machine is Us/ing Us] had a million views and my life changed.

How did it change your life?

I saw YouTube as a platform from then on, as a legitimate way to distribute work to the public. I  now find ways for all my projects to have a YouTube component.

I started the Digital Ethnography program before YouTube, and when YouTube launched [in 2005], very few people knew about it.  Once videos got more momentum, we got so excited about what was happening on YouTube that we decided to study YouTube itself. That started in 2007, and that study led to “An anthropological Introduction to YouTube.” All the things my colleagues care about teaching is readily exemplified on YouTube.

Tell us a little bit about your Digital Anthropology project.

There’s this ongoing myth that our students know everything about the digital world, but in reality, if I were to survey 400 students and ask them if they knew what a codec [a video compression/decompression algorithm] was, maybe 5 hands would go up.  There’s not a lot of knowledge about how to produce video, and even worse, there’s not a lot of knowledge on how to tell a good story.

To make it in today’s world, the “knowledge economy” or whatever you want to call it, storytelling is a pretty important skill. Unfortunately what we teach in school is really memorization, and that’s not going to get people very far.

One of the great things about watching YouTube unfold over the years has been the experiments in storytelling. The normal way we think about storytelling is one person delivering a story to a group, but on YouTube, from even the very early days, people started experimenting with interactive storytelling and multiple-person storytelling.

Why do you think there are so few professors teaching new media and covering YouTube?

There’s a lot of structure, and pressures on us [as academics], and if you look at YouTube comments and just the level of discourse that happens on YouTube, you can see how this would be a dangerous space for a professor to get into.

You also have professors who aren’t necessarily good at talking to a general audience, and YouTube would be their undoing. They would either totally be ignored or ridiculed, so they stay off for that reason.

But then also, we don’t get credit for this kind of thing. Back when I went up for tenure—[which] I did get—I got a message saying, “You checked all the boxes, you did all you needed to do to get tenure, but think how much more you could have done if you weren’t wasting your time on YouTube.”

That’s the type of environment you can get into on an academic campus.

On the other hand, there are a lot of people really excited about new media, and engaging the public with our ideas, and I see already a critical mass emerging where it is okay for professors to be on YouTube, and not just YouTube but any social media platform as a way of sharing their research in new ways.

When I first published on YouTube in 2007 I was definitely way out there, and I had to defend myself against the status quo—but there are enough of us doing it now that our work has legitimacy.

If you were to measure any educator’s worth, if you were to try to come up with a formula, it would be something like “How many people have you inspired or taught?” So you’re a more effective educator if you take your message to more people. It’s a logical step for any educator  to do.

For example, YouTube donated $10,000 to our program in exchange for my going out there and giving [a] talk in person. I have several talks on YouTube, and I am often hired to go give that same talk to a live audience which seems weird, because they’ve already seen it.

It’s really not unlike the music business, where if you want to make a lot of money, you make money touring. If more professors realized this, they’d make more money. If you get your name out there, and people know you’re an interesting, insightful speaker, then you too have to go on tour and play the same songs.

Was there anything that surprised you about the YouTube community when you began your study?

The first thing that surprised me was that there was a community at all.

The next surprise was to find out how deeply people were connecting on YouTube, and how people that you wouldn’t think would connect, were connecting with one another. Whether it’s class lines, or the most surprising, obvious ones were really handsome or pretty people talking with people who were dorky. It shows they don’t judge people.

How did you ingratiate yourself with the YouTube community? They actually like you and appreciate your work. How did that happen?

It’s just like doing any sort of field work, you try to be one of them, and as you become one of them you get the empathy for them, you love them, and generally when you love someone they love you back. It really wasn’t that difficult, because we really liked the people we were interacting with.

We were obviously really worried about that when we first started, and then you also worry about taking people’s material and remixing it and presenting it as research. Who wants to be taken apart and studied? But if you do it in the right way, it can actually be very complimentary.

You say that YouTube connects us in new ways, but to play devil’s advocate, how would you respond to criticism that YouTube is disconnecting us and making us a nation of voyeurs?

That is just not happening. Even though we normally think of the medium as disconnecting us, there’s also the way in which it connects us in new ways, it allows people to let their guard down.

For one, I think in general the whole world of blogging is in itself a niche. There’s not a large population of people jumping on YouTube to watch people’s lives unfold before them. I think people actually find that boring.

In fact the really popular YouTube bloggers, like Fred, or sxephil, are people who are entertaining, they speed up what they’re saying,  and they’re constantly hitting you with a barrage of “interestingness”, but they’re not actually like that in real life. They’re just playing characters.

It’s not so different than television in that sense, except these are independently produced and there is more variety.

New media is what you make of it. The days of blaming the media should be over, because if we don’t like what that is, we can change it.

What has been your relationship with YouTube as a company through all this?

You ask your students “Why are you here, why are you on this planet?” So how would you answer that question?

I just want people to connect more, and more deeply, and that’s what I try to do in everything I do. Everything connects back to that mission. From my background as an educator, to my push for new media literacy, to studying the Web and how it works and how it doesn’t work.  It all comes down to helping people connect.

How does the Web not work?

It doesn’t work in the sense that the Web is populated with applications, and each one of those applications enables us to connect in a certain ways, and disables us from connecting in other ways.  I think very few people are aware of just how much better the Web could be—that goes for YouTube as well as Facebook.

Face-to-face communication is still a standard-bearer for creating deep and meaningful connections, to the extent that people use the online world to make friends.

This is the sort of thing we need to discuss in classrooms, to teach media literacy in a way that helps students become masters of their own world and have the courage to connect deeply with other people, and have the knowledge to know how these online worlds are structured and hopefully how they can restructure them.