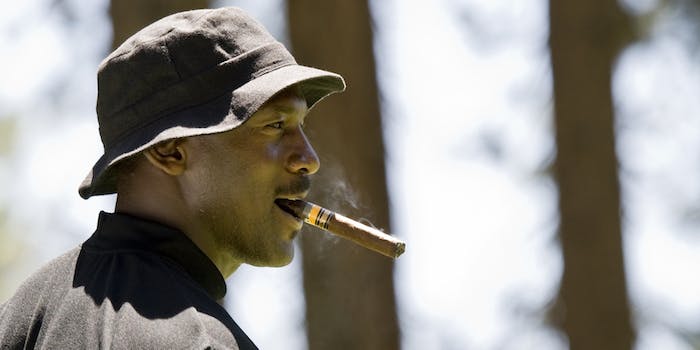 As NBA season tips off, His Airness makes his Twitter debut.

Michael Jordan is still fairly new to the whole social media thing, but the Charlotte Hornets owner took over the team’s official Twitter account Tuesday to connect with fans and share some selfies. He kicked things off the same way everyone christens their Twitter accounts—with a joke.

I’M BACK! …just kidding LOL. Trying out social media for the first time and sharing my day with you. Ready? #MJTakeover

Something about Michael Jordan typing out “LOL” makes me laugh right along with him. MJ then tweeted out some of the sophisticated commemorative swag those in attendance opening night can expect.

Special perks of being owner, already got my commemorative ticket and shirt for opening night. Niiiiiice #MJTakeover pic.twitter.com/R8VnZPUZd3

Not a bad start. He’s already better at Twitter than Magic Johnson is.

The only way San Antonio or Miami don’t win the championship is if neither team makes the finals.

To prove to the haters it was really him tweeting, MJ then sent out his first selfie.

The framing and composition of his selfie pic isn’t top notch yet, but he’s off to a good start. And he’s definitely got photobombing down.

Photobombed by the boss! pic.twitter.com/ulHXAb1ioF

What would any Jordan Internet takeover be, without some snaps of his team in action?

He didn’t provide any shots of his notoriously bad denim jeans assortment (Google it) or any answers to the question everyone’s been asking since the day he retired. But he did tweet out a photo of the greatest sneaker collection ever to get fans salivating.

The G.O.A.T. seems to be having a blast on Twitter and fans are loving the peek into his day-to-day running the Hornets. Maybe we’ll be able to convince him to come back to Twitter a second and a third time, just like he did in his playing career.

Photo via Simplistic Designs/Flickr (CC BY 2.0)