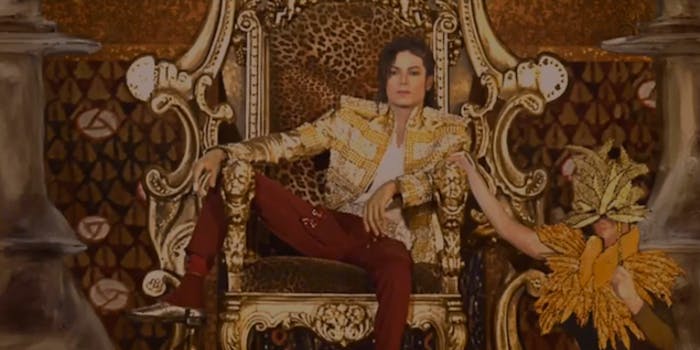 Where do we draw the line with reincarnating dead celebrities for entertainment value?

Do you remember the time… Michael Jackson moonwalked across the stage as a hologram?

Last night at the Billboard Music Awards, nearly five years after his death, Jackson “performed” a new song, “Slave to the Rhythm,” from his posthumous Xscape album, and it was surreal to see a not-quite-Michael-Jackson flitting across the elaborate set.

This macabre spectacle is just the latest in a string of hologram appearances by performers both dead and alive. Tupac Shakur was digitally resurrected in 2012 for Coachella, and while he was promoted as a hologram, it was likely just a really expensive CGI job. Last month, hologram versions of M.I.A. and Janelle Monae appeared next to each other, on different coasts. It was a promotion for Audi, and in their case, the promotion was sort of interesting. But where do we draw the line with reincarnating dead celebrities for entertainment value?

Before the Billboard Awards, the companies that created the Michael Jackson hologram, Musion Das Hologram Ltd. and Hologram USA, sued the show’s producers and Jackson’s estate to block its appearance on the show. They weren’t successful, obviously: Two days before the awards, a federal judge ruled the hologram could go free.

Did we gain much by seeing Jackson perform again? It was a curiosity we could all gawk at via social media, but it seemed tacky to remember a man who changed the of landscape of pop music by making him a copy of a copy of a copy.

H/T The Verge | Screengrab via ABC