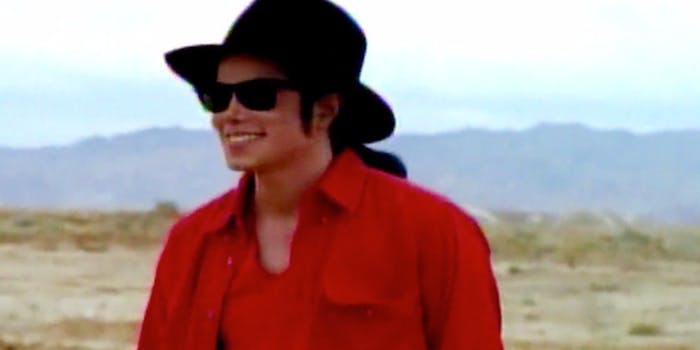 This is why you should still be following the King of Pop on Twitter.

Wait, what? Last night, the King of Pop’s estate released the second new music video since his June 2009 death, a reinterpretation of America’s “A Horse With No Name” called “A Place With No Name.”

Premiered via Twitter Wednesday evening, the video features a series of clips of two people dancing in the desert, with footage stemming from outtakes of Jackson’s 1991 video for “In the Closet” interspersed between.

It’s time! The first ever premiere of “A Place With No Name” right now on Twitter #MJXSCAPE https://t.co/rRA0KJEBpg

The video comes directed by music video icon Samuel Bayer, who’s also responsible for Nirvana’s “Smells Like Teen Spirit” and Blind Melon’s “No Rain,” and supports the May release of posthumous effort Xscape, the second album of Jackson’s material to be released since his passing.

It’s cool to see Michael groove again, even if none of the footage can be classified as new. No word yet on what America thinks of the remake.