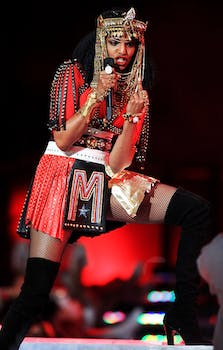 Spirited or selfish? M.I.A. flips the bird at the Super Bowl

The controversial rapper found a way to kick the hive during her halftime performance with Madonna.

Performing at the Super Bowl in Indianapolis with Madonna on the premiere of the pop queen’s new single “Give Me All Your Luvin’,” the enigmatic British pop star—at once a champion of any given revolution and the mega-rich fiancé of mega-rich environmentalist Benjamin Bronfman—closed out her guest verse by flashing her middle finger to 69,000 attendees in Lucas Oil Stadium and 110 million people watching at home.

NBC’s production crew, working with a telecast run on slight delay, caught the gaffe but pressed the ever-important “Blur Out The Entire Screen” button about a half-second late. That made M.I.A.’s esture the most talked about half-time malfunction since Janet Jackson’s nip slip in 2004.

Naturally, the Internet had a field day with M.I.A.’s actions, with many of her fans heralding the singer’s defiant ways.

“I’ve always loved M.I.A., but now I’m obsessed,” AfzalAlmighty posted to his Tumblr, along with the widely circulated, incriminating shot.

“M.I.A. 1, FCC 0,” echoed MockTheBells, whose Tumblr post falls in line with many of the 36,000 posts to Twitter that championed the rapper, born Mathangi “Maya” Arulpragasam, as “too trill for her own good” and a “true G”.

Not everybody was so supportive of the action, however.

Billboard Magazine Executive Editor Bill Werde (@bwerde) was quick to chastise the artist, tweeting “Hey MIA: do you care that that was an asshole move to Madonna, who let you take part in the super bowl so you could promote your new single?”

Others, like Rhapsody Managing Editor Rob Harvilla (@harvilla), were simply unmoved by the action. “M.I.A. Now Going Door to Door Trying to Shock People,” he tweeted at 11:07pm EST.

The evening’s most insightful comment came from YouTube user MrMeraby, who posted the following in response to a video of the performance:

“There word to use here – is Selfish. If you’re on stage with someone whose career has dwarfed yours, give her the respect of not making yourself a spectacle. Madonna, who is no stranger to making herself a spectacle, played it straight on put on the best half-time show in years (though that’s not saying much). So why would an upstart nobody (and compared to Madonna, everyone else on that stage was an upstart nobody) steal what should have been her debut to a brand new generation.”