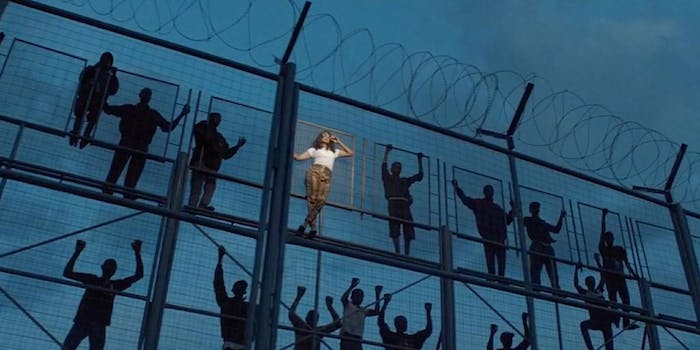 With music video for ‘Borders,’ M.I.A. speaks out on refugee crisis

'Borders' is a powerful indictment of closed borders around the world.

Never one to shy away from political controversy, rapper M.I.A. just went toe to toe with most of the U.S.’s state governors in a strident defense of the disenfranchised migrants of the Syrian refugee crisis.

The music video for “Borders,” a single from the upcoming album Matahdatah, sees the British artist joining a group of refugees and detailing their struggle in a tense quest to escape safely through dangerous territory and find a new place to call home.

The physical obstacles are just the beginning for the refugees in this video, which sees M.I.A. blatantly calling out the privilege and identity politics of the regions of Europe and North America that have called for a closing of borders. “We sully them, we don’t need to kick them,” she sings against a backdrop of barbed wire.

The video, which M.I.A. directed, strikes a very personal stance on the reigning political issue of the moment. Born Mathangi “Maya” Arulpragasam, M.I.A. and her family fled their home in war-torn Sri Lanka when she was just a child, battling poverty and displacement and many of the same issues facing Syrian refugees today.