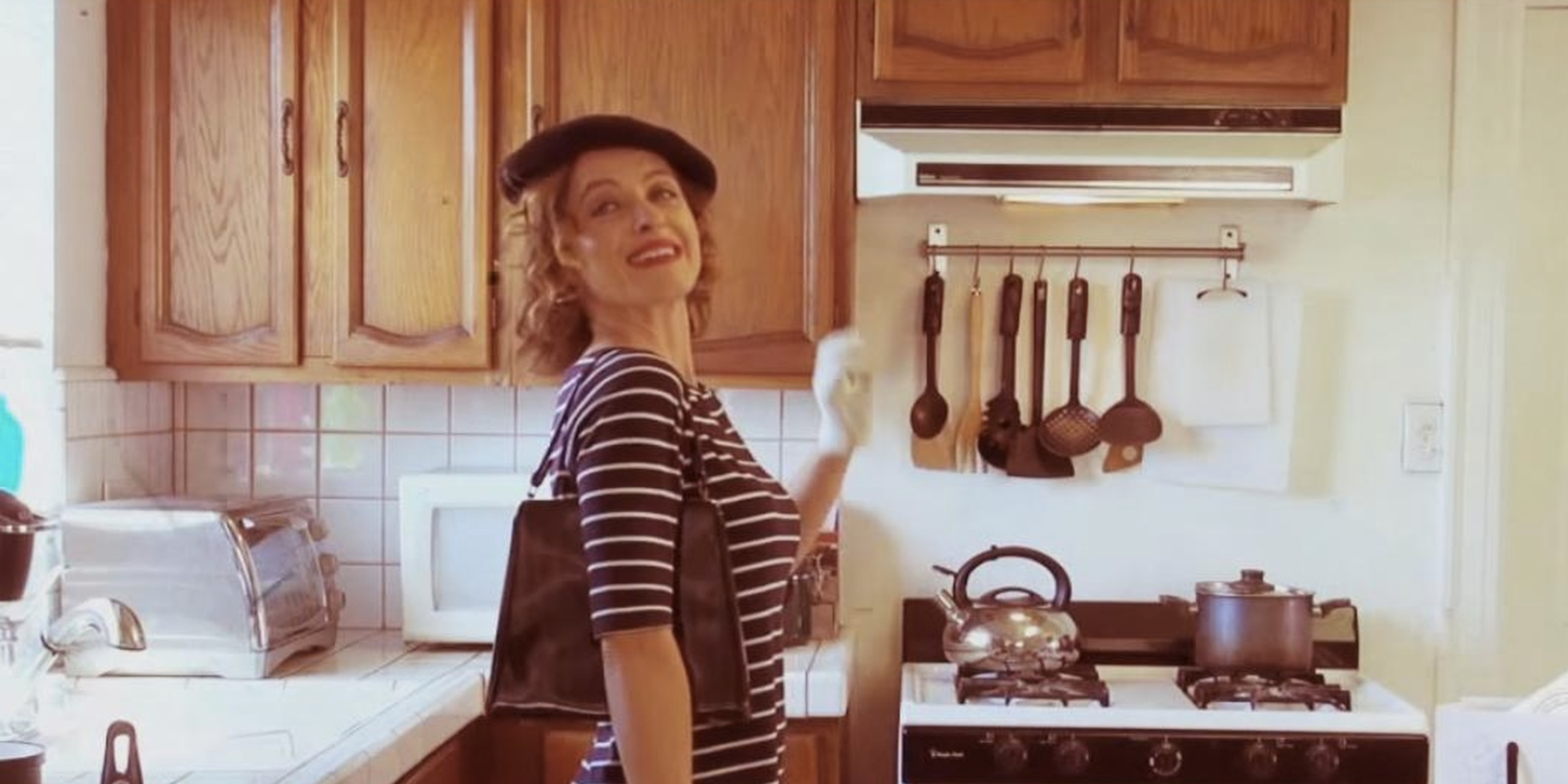 What happens when a Scottish mime tries her hand at a cooking show?

Mhairi Morrison's Feathers and Toast is the ultimate show-within-a-show webseries.

Mhairi Morrison, the creative force behind the webseries Feathers and Toast, learned the difference between creating a low-budget show and one of high quality produced at a small cost.

“The number one reason projects fail is they overshoot their goals,” Morrison told the Daily Dot. “I was interested in a simple idea when you are yourself and not try and manufacture anything. That way people can see the reality behind your work.”

Feathers and Toast is a screwball comedy in the style of Lucille Ball and Carol Burnett in which our heroine Tallulah dances about her kitchen mixing random patter with a small smattering of actual food prep. The idea, Morrison said, came from her own experience after a film studio executive suggested she try her hand at creating a webseries to showcase her comedic and acting talents.

“The idea for Tallulah came about because when I cook for myself I dance and speak out loud in French,” Morrison explained. “I said, ‘hold on a minute, this could be quite interesting.’”

Morrison worked her producing partner Holly Payberg, a veteran webseries writer, to develop the persona for the lead character:

“Tallulah is desperate woman trying to propel herself to higher level,” the actress said. “She reinvents herself as this cook who did a mime course for a weekend so now she thinks she’s brilliant at a lot of things, but if you scratch beneath the surface, there is not much there.”

Morrison’s classical training is evident in her characterization of a narcissist would-be mime who is out to save the world, one sandwich at a time. As with many talented actors, Morrison instinctively knows the line between being offbeat and silly. Her background includes studies at The Royal Conservatoire of Scotland and Jacques Le Coq School of Theater in Paris. She has performed on a number of British TV shows as well as on the stage before moving to Los Angeles where she teaches acting and performs stand-up comedy.

What sets Feathers and Toast apart is its take on the concept of a show within a show. The program seemingly comes to an end when Tallulah finishes off her recipe, but at that point, a second narrative begins. The mime turned chef begins a dialog with her producer and cameraman in which Tallulah rambles on about her lost love in France and the comments she receives about her show via social media. The two threads seamlessly work together for some clever laughs. Morrison looks to the original concept of Seinfeld—where the shows start and end with the comedian’s stand-up routine—as a template for her future vision.

There are two seasons of Feathers and Toast available on YouTube. Each season was shot in one day; the first set was done in June 2013 with the second in August. To keep costs low (“Our only real cost was food,” Morrison noted), the webseries was filmed at the home kitchen of her producer, whose husband Diego Torroija acted as cinematographer and camera man. The cast and crew are entering a number of webseries festivals  to try to get eyes on the series.

An interesting side note is the fact that until earlier this year, Morrison never had heard of American film actress Tallulah Bankhead who embodied a sense of libertine style that set her apart in the early 20th century. After doing some research, the Feathers and Toast star came to realize she and Bankhead had a number of common traits including a love for the British newspaper, The Guardian.

That said, Morrison’s comic hero is Lucille Ball. With visions of Lucy at the assembly line of a chocolate factory, it is easy to imagine an upcoming episode of Feathers and Toast with Tallulah trying her hand at candy.

Screengrab via Feathers and Toast/YouTube