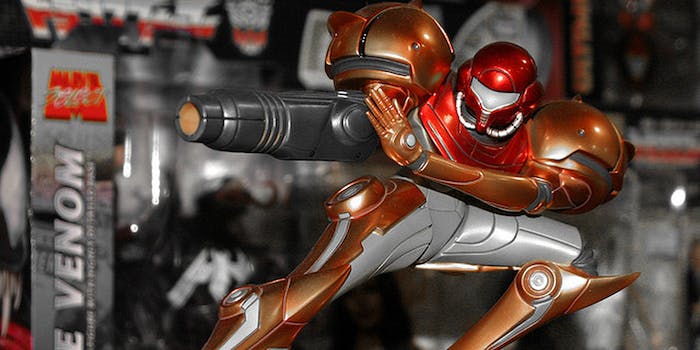 Another day, another Kickstarter project taken down because of copyright infringement.

Another day, another Kickstarter project taken down because of copyright infringement.

The project page for a live-action fan film based on the popular video game Metroid has been pulled from the crowdfunding site after Nintendo, owners of the property, filed a copyright notice.

“Despite Metroid’s massive popularity and status as being one of Nintendo’s most successful franchises ever with over 17.44 million games sold, a feature film version has never materialized,” wrote project creator Massive State on their now deleted pitch for Metroid: Enemies Within back in early August, when the campaign was launched.

“We believe Metroid deserves to be made and we want to give it the Hollywood treatment.”

The creators also emphasized that their short (it was supposed to run about ten minutes) was a not for profit endeavor and was not endorsed or affiliated with the video game giant, most likely as an attempt to prevent Nintendo from dropping the copyright hammer on them.

That didn’t happen. On Thursday, Nintendo sent Kickstarter a Digital Millenium Copyright Act (DMCA) notice asserting its ownership of everything related to Metroid. By Friday the page was gone, along with the more than $20,000 raised (Massive State was looking to raise $90,000).

That Nintendo invoked the DMCA isn’t particularly surprising. In May 2013, the company filed copyright notices with YouTube to collect ad money generated from Let’s Play videos that used footage from its various properties.

Nor is it surprising that Metroid: Enemies Within, even though it blatantly ignored Nintendo’s rightful ownership of the property, was approved by Kickstarter in the first place. The company’s own Terms of Service explicitly bar any projects that infringe on copyright or patents, so the obligation to establish ownership isn’t on them.