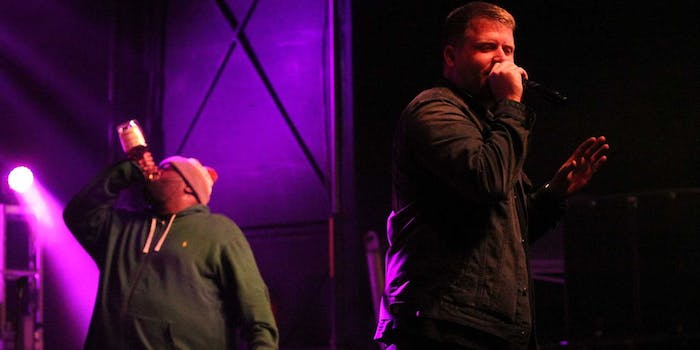 Internet, are you not entertained?

That moment when you listen to the best hip-hop album of the year and think to yourself, “This record would be better if it were made with nothing but cat sounds.”

It’s a great moment, but even better is the moment when you realize that ridiculous cat sounds thing is actually happening.

Over the weekend, rapper/producer El-P, one half of the hip-hop group Run the Jewels, posted a trio of short audio clips from the recording process of Meow the Jewels, a cat-themed, full-length remix of the band’s acclaimed 2014 sophomore record, Run the Jewels 2.

and so it begins. #MeowTheJewels

oh my god what am I doing with my life. #MeowTheJewels

Unsurprisingly, Meow the Jewels started as a joke. Last year, the merchandise section of the group’s website included a number of gimmick packages that fans with too much money could purchase. The whole thing was clearly satirizing money-grubbing musicians sucking up to their rich fans by offering exclusive perks in exchange for giant piles of cash. One of options, which boasted a $40,000 price tag, was “re-record RTJ2 using nothing but cat sounds for music”

The group clearly underestimated how much people on the Internet like cats. Fans quickly launched a Kickstarter campaign and raised $65,783 from over 2,800 people in a few short days.

After El-P, along with collaborator Killer Mike, agreed to actually go through with the project, they quickly signed up an impressive list of guest stars: Just Blaze, Dan the Automator, Prince Paul, Zola Jesus, the Alchemist, Geoff Barrow, Skywlkr, Nick Rook, Baauer, Boots, and Solidified Sun.

However, these human contributors aren’t nearly as important to the success of Meow the Jewels as the feline ones, which is why El-P visited a Brooklyn animal shelter last October to audition talent:

Luckily, El-P eventually got some help from the Internet’s most famous cat, Lil Bub:

E-P has said that all profits from Meow the Jewels will go to the families of Eric Garner and Mike Brown.