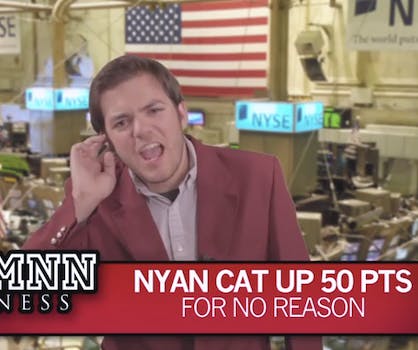 YouTube right now! “What If There Was a Meme Stock Exchange?”

In light of Facebook's recent IPO, this hilarious parody provides apt commmentary on the absurdity of these modern times.

A new video has captured the absurdity of the Facebook IPO—a public sale for what is essentially a procrastinatory tool—with delightfully nutty commentary on these strange times.

Comedy team Student Loans for Beer Money envisions a world where Dr. Who erotica replaces the British pound as currency and a photo of a cat in a wizard costume sells for $600 a share in “What If There Was a Meme Stock Exchange?“

“People running around, buying and selling meaningless junk that no one cares about, just like the real stock market!” states the video description.

Over the course of this parody video, a TV reporter named John speaks with two fictional authorities—Greg Sanderson, an (aptly Libertarian) redditor, and Dr. Winston Ninegagg, the purported founder of meme dumping ground 9gag.com. Though they are purposely exaggerated caricatures, those who dwell on the Web may see something of themselves in the two.

“John, in a sense I am saying complete and total gibberish,” said Dr. Ninegagg. “But, like most people who work on the Internet, I am a Nihilist.”

Watch the video for some equally apt Internet insights: