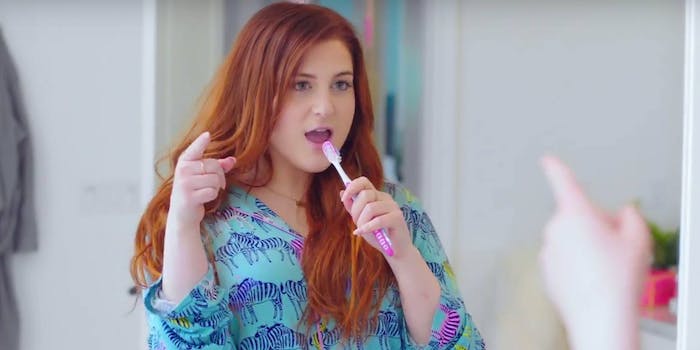 Meghan Trainor pulls ‘Me Too’ video over Photoshopping claims, debuts new one

'I didn't approve that video and it went out for the world.'

Meghan Trainor released her video for “Me Too” on Monday, but if you blinked, you might have missed it.

In a Snapchat video posted yesterday, the “All About That Bass” singer claimed that she never approved the final video, and that editors “Photoshopped the crap out me.”

“My waist is not that teeny,” she says. “I had a bomb waist that night, I don’t know why they didn’t like my waist. But I didn’t approve that video and it went out for the world. So I’m embarrassed.”

It’s not clear who “they” are, but last night, Trainor went on Watch What Happens Live to address the issue, explaining that when she saw the video, she “thought the fans were doing it online, and they were screenshotting it, and I was like, ‘What’s going on?’ And then I saw my video and was like, ‘Oh my god, it’s my own video.’ And I called the gods of Vevo and said, ‘Take that down now.’”

Trainor, who became thinkpiece fodder after “All About That Bass,” has seen controversy with every video she’s released. She claimed that “All About That Bass” was about body positivity and loving your curves, but then came claims that she was shaming skinny people, and in a 2014 interview with Billboard, she asserted that she doesn’t consider herself a feminist.

Last year, she faced more criticism for the video for “Dear Future Husband,” which featured her scrubbing floors in stereotypical ’50s housewife attire. In March, she released the video for “No,” which is ostensibly about consent and not needing a man to feel good about yourself—the polar opposite of “Husband”—but it seemed to rub people the wrong way too. Trainor has spoken out against Photoshopping in the past, and last month, fans called out Seventeen for altering her cover.

There’s a cognitive dissonance around the 22-year-old singer, who provides what appear to be empowering anthems for women and girls but doesn’t fully give into the labels associated with that. We want young female pop stars to stand for something, to find power in their message, to start a hashtag, even as their bodies are digitally altered. Writing for Nylon, Anne T. Donahue tried to figure out the Trainor dilemma too:

We want her message to mean something. We want another pop star to step up and Beyoncé the shit out of her platform because we know how influential pop music can be. We want her to be more than someone who writes and performs songs; someone who creates tracks like “No” with a larger perspective attached.

But she’s 22, and perhaps she doesn’t have a larger perspective just yet. On Tuesday, a new version of “Me Too” appeared on her Vevo page, with her real waist apparently starring in the final dance scene. She posted a side-by-side comparison on Instagram.

Trainor’s latest album, Thank You, comes out Friday. It seems like in the lead-up to a big album release, the artist should have seen the final product for a big video. We’ve reached out to Vevo for comment.