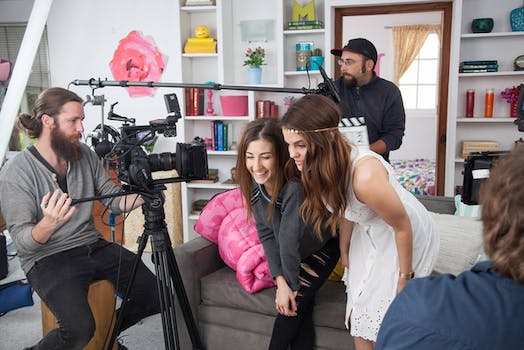 Five-episode 'It's a Girl Thing' is DeAngelis's first foray into scripted content on her channel.

Perched outside a Melrose hair salon during the rush hour commute, Meg DeAngelis thinks her hair looks a little crazy. Right now it’s wet, since she just filmed a scene of it being washed. But she’s really excited about the wig they’ve got for her, an asymmetrical bob that’s just the wrong shade of asymmetrical so that it crosses from trendy to tragic.

“They’re all a series of awkward moments,” DeAngelis explains of the episodes in It’s a Girl Thing, her first self-produced scripted series that launches May 1. “But for this one, it’s right before my birthday party and I get a terrible haircut.”

DeAngelis shows off a picture on her phone, and, honestly, she actually pulls it off.

“I was sending that to my mom to see if she’d believe it,” she laughs. “Taylor Swift does it so well. That doesn’t work on most people.”

DeAngelis started her YouTube career sharing cheerleading videos in 2008, although moments of her vlogger future peeked through with simple braid tutorials. By 2011 her content became a mix of cheering and lifestyle vlogging, and in 2013 she completed her transformation to a modern blogger when she left a college cheer team and moved to Los Angeles to live her YouTube life.

DeAngelis has starred in digital projects outside her channel before, from AwesomenessTV’s Royal Crush series, which follows a budding teen romance on a cruise ship, to the recently released YouTube Red film Dance Camp, but all her outside projects left her feeling something was missing.

“I felt kind of bad that I haven’t been uploading as much as I usually do,” DeAngelis explained of her motivation to make her own series. “I wanted to give my subscribers something to watch that’s still free but just something better. Higher quality, funnier, smarter, more planned.”

The idea for her own series started a year and a half ago, but DeAngelis adjusted her plans after learning that biting off too much was a surefire recipe for crushing her own excitement.

“You can’t try and make something too big; you won’t ever make it,” she explained “We started taking meetings to see who would be in and where it would live, it got so big that I lost the passion for it, in a way. That’s how I realized I had to do something short, something we can do all in one and we don’t have to stop in between.”

“He told me he watched all my videos,” laughed DeAngelis of how a male writer could get her voice down for a girl-themed series.  “I gave him talking points for what I wanted the episodes to be about. They were so amazing. I’d never worked with a writer before. I read the first episode, [and] I was just laughing so much.”

The five-episode series shot over six days in April, with DeAngelis calling on friends and former co-stars to join her in the series, like YouTubers Ricky Dillon and Carrie Rad, who plays Meg’s fictional best friend Astrid.

“At first I thought I knew exactly who I wanted to play each part, but after I read the script, I had completely different people in my head,” she said. “I have four of five friends—I don’t have many friends—I asked them all first. After that I just went and thought, ‘Who have I worked with on projects before who are super talented?’ I got all my first picks.”

The first episode sees Meg’s world turned upside down with the arrival of Astrid, who has plans for Meg’s 21st birthday. In addition to starring in the series, DeAngelis is also behind the camera as the director on the project. With five minutes until places, she’s fluttering around the small hair salon checking angles, the background props, the lighting. It’s a far cry from her usual recording process for the vlog.

“When I film my videos, I don’t plan anything more than what I physically need there,” she said, noting there’s a lot more planning and moving parts in this project. “I wish I had a prop me, or a clone or something. I thought we’d do it with a stand-in, but we don’t have enough interns. I watch the playback of the first take, and it helps so much.”

As much as the project rests primarily in her own hands, DeAngelis has another important voice she lists to across the process: her 4.9 million fans. While she has been careful not to tell them much about the project yet, she has been sharing some of the process across her social media channels, and has even left key decisions in their hands, like the name of her series, which she let come down to a poll.

“I was so sure I was going to go with one of them, but then I thought, ‘Let me just ask them,’” she said. “I did a one-day poll, and 75 percent of people went with the other option. I am so glad I did that!”

Keeping her fans somewhat in the dark has been hard for DeAngelis, who’s used to sharing her life so openly. With only a few more days before the big reveal, she can finally let them in a little further.

“I’m kind of sleep deprived and happy,” explained DeAngelis on the eve of her final shoot day. “I just want people to see it!”

It’s a Girl Thing premieres May 1 on DeAngelis’ YouTube channel, and will air every Sunday to coincide with her real-life 21st birthday.