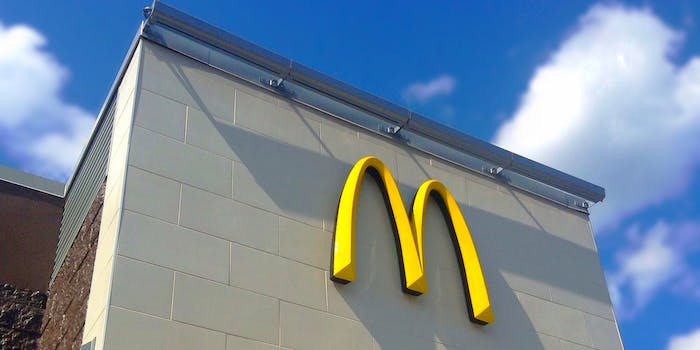 McDonald’s asked a band to play for free, and they’re not lovin’ it

$90 billion McDonald's says it doesn't have a budget to pay bands.

What does McDonald’s have in common with an eager startup welding together capital for a run at the glitz and glamour of South By Southwest? Both have shamelessly asked musicians to perform for free.

In the case of the fast food titans of industry, they reportedly asked Brooklyn indie rockers Ex Cops (fresh off sophomore LP, Daggers) to play the McDonald’s showcase at the annual Austin, Texas, technology, film, and music convention. It’s a prime gig, except that the $90 billion company offered to compensate Ex Cops with—and this part is fun—exposure.

Luckily, the tonal disconnect in the offer was not lost on band member Brian Harding. He took to Facebook to vent.

Last year, Lady Gaga gave into the corporate nature of SXSW proceedings and was paid $2.5 million by Doritos to perform. Taco Bell also sponsored the Hype Hotel and dished out free Doritos tacos to patrons. This year’s attendees can expect the same red carpet treatment from Team Golden Arches:

The McDonald’s Lounge will feature our McCafé coffee brand, along with comfortable couches, Wi-Fi, charging stations and televisions streaming various sessions and events, and will be home to salon sessions, panels and hackathons. We’re focused on providing consumer convenience, including a “Fry-Fi” food truck offering attendees free Wi-Fi and McDonald’s World Famous Fries.

If you’ll be there and can’t resist free coffee, remember to at least drop a few bucks into the tip jars of the poor suckers stuck performing background filler.