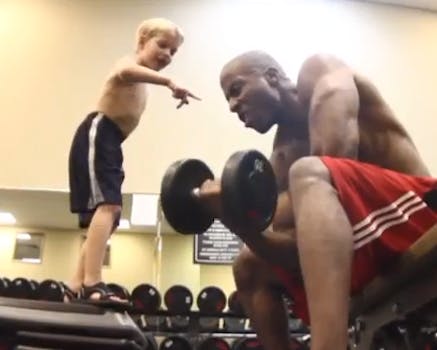 Here's what happens when you overdub a 6-year-old voice's with the mouth of a sailor and voice of a black man.

Let’s get one thing straight: If you give a 6-year-old blond boy the mouth of a sailor and the voice of a black man, you will make a lot of people laugh.

Baralk and his boy had the brilliant idea to commission Barak’s loud-mouthed anonymous coworker, a black man, to play the voice of Max in October, when the slick-talking little boy first showed up on screen wearing a red cape, videogame headpiece, and oversized stunna shades, and talking about Star Wars, with the same diction and vehemence as legendary office linebacker Terry Tate.

“Darth Vadar, cold motherfucker,” he explains. “I’ve never seen anybody come on screen like that and just wreck shit for everybody.”

A day later, Max showed up again to tell a story about stopping into a McDonald’s before a play date.

“We pull in, walk our asses up to the counter, and I’m like, ‘Gimme some chicken nuggets,'” he says. “Happy meal.”

That’s the duo’s most popular video, having pulled in more than 110,000 views since going up last month. But it may not be their funniest.

That distinction goes to a workout video that went onto YouTube Oct. 22 and finds Max shirtless and adorned in temporary tattoos while he pushes a rather ripped black man to “push that shit” on a bench press.

The whole thing is like a backwards iteration of the Roberts brothers’ Kid Snippets series that took YouTube by storm this summer. According to Max’s cousin, a redditor who posts under the name princesspwnr, the gag is something Max loves and that it’s not that unexpected considering the way he was raised. She said that Max’s parents allow him to swear around the house “as long as it’s not at his mama or around his grandma” and that he “mainly does it when he’s with his older brothers or playing video games.