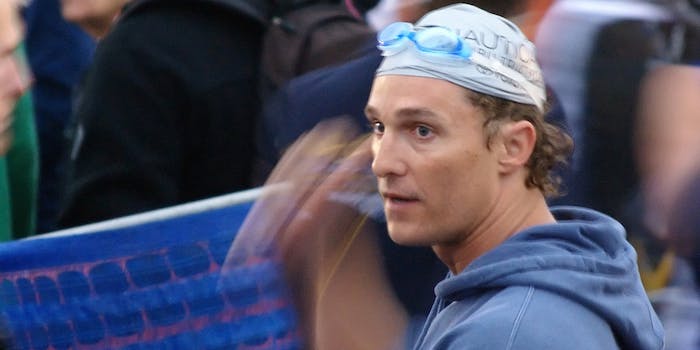 It's pretty clear why he got the part.

Over 20 years ago, the comedy film Dazed and Confused hit theaters. Its fun romp through a party in the 1970s not only won over audiences, but also introduced them to a handful of actors who would go on to become ridiculously famous. This roster included Ben Affleck, Milla Jovovich—and Matthew McConaughey.

While he may be a Hollywood A-lister today thanks to his Oscar-winning role in Dallas Buyers Club as well as memorable roles in everything from The Wedding Planner to Interstellar, McConaughey was little more than a pretty face with a difficult-to-spell surname back in 1993. Nevertheless, he amused audiences with his turn as 20-something stoner David Wooderson, best known for the lines “That’s what I like about these high school girls: I get older, they stay the same age” and, of course, “All right, all right, all right.”

Now, McConaughey’s audition tape for Dazed and Confused has surfaced, affording his fans a rare glimpse at the earliest years of the superstar’s career.

He didn’t look too comfortable with his now-classic line, did he?

Compare it with the finished product.

BroBible has the backstory on how he landed the gig:

McConaughey actually got the part as a matter of chance. He said he was hanging out at a hotel bar in Austin, Texas, when he just so happened to run into Don Phillips, a casting director. The two did some drinking and quickly developed a bond. “Top of the Hyatt, Thursday night!” McConaughey said. “I went there because the bartender there gave me free drinks because he was in my film school class [at the University of Texas at Austin]. We got kicked out! We were really drunk. We were talking about a golf hole that we had both played and we were just so loud that management told us to leave.” Matthew sure knows how to make a first impression.