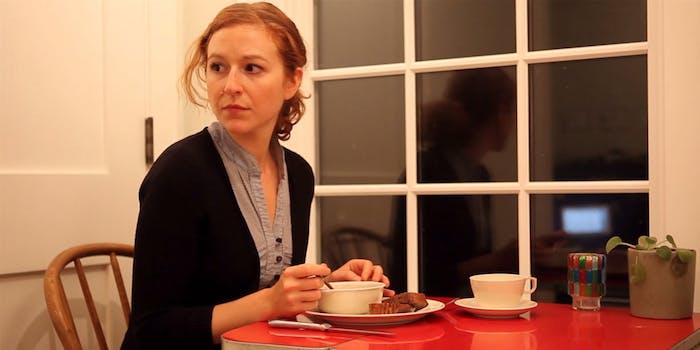 The matching of a multidimensional approximation of data might not seem like the foundation for a bright, engaging webseries, but Matching Pursuit, the story of a mathematician facing an existential crisis, is far more than an exercise in number geekdom.

Our hero is Rachel Blumenfield-Goldenfeinberger, an obsessive, laser-focused grad student whose academic skills far outweigh her social acumen. Her advisor, friends, and even her bubbe urge her to seek a life outside of algebraic equations and predictive analytics. Trying to find the balance between her pursuit of personal achievement and finding her life’s match (hence the show’s name) becomes the theme played out in Matching Pursuit’s first six of eight episodes.

It is fascinating to watch Matching Pursuit mature with each passing episode. Fiffer as the lead brings talent and experience to the role, and as we follow the up-and-down trajectory of her life and career, the sometimes-inconsistent supporting actors begin to play off the Blumenfield-Goldenfeinberger character with greater ease. The story arc is quite compelling with a strong “wonder what will happen next” element that will bring audiences in and keep them engaged.

The show is the brainchild of actress Nora Fiffer and writer Rachel Abrams, who met as college roommates at New York University. As young students thrown together by chance often vow, the pair dreamt about working together on a project sometime in their future. Matching Pursuit represents the fulfillment of that ambition with Fiffer in Chicago and Abrams in New York combining talents despite the meaningless 780 miles that separate them.

True to her calling as an actress, Fiffer told the Daily Dot that the character of Rachel grew out of some dialogue she improvised in a dressing room before a performance.

“She needed a life beyond the improvised world of the dressing room,” Fiffer said. “We began to uncover her goals in life and in romance. At that point the nature of show started to grow beyond who the character is.”

The first eight episodes of Matching Pursuit were done in two phases. The first three were self-funded and done with cost savings in mind and employed a cast and crew that represented a mix of established actors with a few newcomers added. For example, the role of the bubbe—modeled after Rachel’s grandmother—was tackled by the mother of one of Nora’s friends.  “She looks and feels like family,” Fiffer noted of the actress who had no previous theatrical experience. “She embodies the character beautifully.”

The remaining five episodes—three of which have been released—were produced with the assistance of a Kickstarter campaign that raised $10,580. That additional funding allowed Fiffer and Abrams to take their passion project to a more sustainable level. “We decided to crowdfund because we wanted to keep the story going and keep our heads above water,” Fiffer explained. The goal, as co-producer and writer Abrams added, “is to continue to develop the character and go beyond proof of concept to a possible longer-form presentation.”

In a time in which distance no longer gets in the way of creativity, the two work together in various online forms while Fiffer is in Chicago and Abrams is in New York. For some of the shoots, which are done in Chicago, Abrams has flown to the midwest for the filming. She’s also done costume consulting from home via image-sharing and phone conversations.

Fiffer and Abrams are letting the show’s popularity and positive feedback dictate its future. One of their goals is to enter Matching Pursuit in a number of Web festivals, but for now the focus is on the full run of season 1.