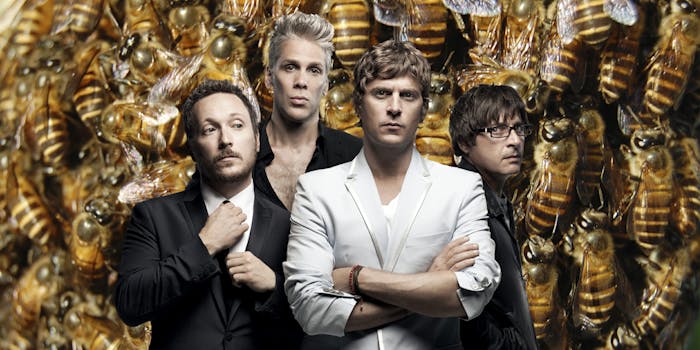 A Matchbox 20 concert was delayed for more than an hour after bees swarmed the venue.

The group is currently on tour with Counting Crows, and at a stop in Tucson, Arizona, on Thursday night, a swarm of bees descended on the venue. While no one was reportedly hurt, there have been two fatal bee attacks in Tucson this week.

The concert was delayed while beekeepers handled the hive. Apparently Northwest Exterminating deals with more than just scorpions wearing fedoras.

Thanx #Tucson for waiting around. SO glad we got the show to happen! #ABriefHistoryTour #summer#tour#bees

Beekeeper has arrived!! Still trying to make this happen. Can't make this up! #tour #summer #ABriefHistoryTour

But bees and Matchbox 20? The memes came swarming, as did “It’s 3am and I must bee lonely” and “I wish the real world would just stop hassling bees.”

I take no pleasure in this, but someone had to do it. pic.twitter.com/FxVKXGVCMC