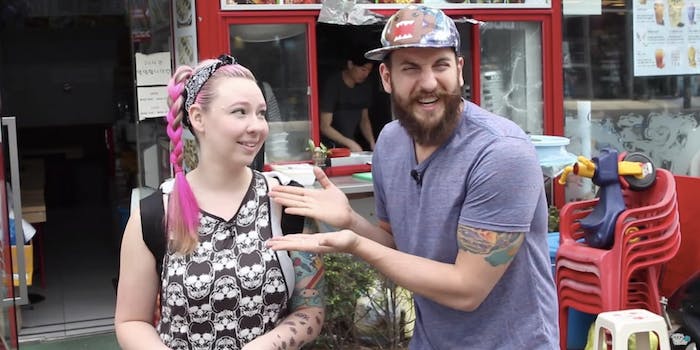 Martina and Simon were really the first creators to gain popularity in South Korea.

Every morning Martina Stawski wakes up in Seoul, South Korea—sandwiched between her husband, Simon; her pup, Spudgy; and her cat, Dr. Meemersworth—and pops a dislocated joint back into place. Martina lives in chronic pain caused by the connective tissue disorder EDS (Ehlers-Danlos Syndrome)—something fans of her and Simon’s long-running YouTube channel Eat Your Kimchi were shocked to discover earlier this year.

Like most of the couple’s 800,000 fans, I was so shocked by Martina’s story—not because a health condition is so out of the realm of possibility for anyone behind the camera, but because of Martina’s unbridled enthusiasm and a love of life that practically engulfs you through the screen of each video. To me, that zest for life is the sign of a very special lady.

Though YouTube will celebrate its 10th birthday next week in the United States, the video-sharing platform did not become available to the South Korean public until 2008, the same year Simon and Martina moved there from Canada to start teaching English. Originally, the couple began uploading videos about their life in South Korea to show their family they were still alive, but over time, their channel has evolved into an empire, now complete with its own studio, café, merchandise line, and radio show on SBS PopAsia. To put it in perspective, the couple’s fans are so enthusiastic about Eat Your Kimchi that in 2012, when the couple set up an Indiegogo campaign hoping to raise money to build a new studio, they met their goal of $40,000 in seven hours and ultimately raised a whopping $113,000.

Martina and Simon were really the first creators to gain popularity in South Korea, and they were on the vanguard of the travel/culture vlogging genre on YouTube. Today, the couple releases six videos a week (they’re probably making a video as I write this!) and cover everything about Korean life in their popular series Kpop Mondays, TL;DR, Wonderful Adventure Now Korea, Food Adventure Program for Awesome People, and Wonderful Treasure Finds. In each video—whether they’re talking about dumplings, drinking, prostitution, stereotypes, or North and South Korean politics—it feels like the viewer is sitting down to talk with an old, trusted, and hilarious friend. I would have never known half of the things I now know about Korean culture if it weren’t for the discussions by Simon and Martina.

And Martina—with her bright girlie outfits, amazing tattoos, colored hair, crazy nails, eccentric personality, and adorable Spudgy voice—has become a role model, encouraging women to be confident in the multifaceted person they are. Personally, she inspires me to take more adventures and laugh harder along the way. And also to buy more cartoon animal clothing (not that I needed more encouragement to do that).

So from across the ocean, cheers to you, Martina Stawski, and thanks for opening up my eyes to all the adventures the world has to offer.