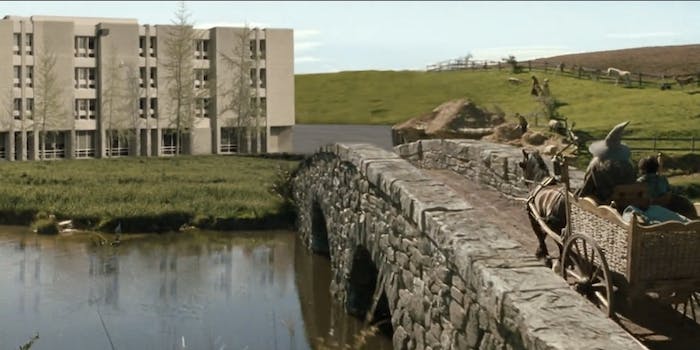 Bilbo Baggins works at a paper company in Saturday Night Live’s epic mashup when host Martin Freeman reprised his roles as both Lord of the Rings’ Bilbo Baggins and the suit-clad paper salesman Tim in a parody dubbed The Office: Middle Earth.

Freeman is probably best known for playing Bilbo Baggins in The Hobbit, and the third film in the series, The Hobbit: The Battle of the Five Armies, hits theaters this week. Freeman also played Tim in the U.K. version of The Office, a character U.S. viewers will better know as Jim.

Freeman as Baggins joins other friends from Middle Earth including Gandalf, Legolas, Gollum, and an elven secretary as Baggins’ love interest.

Gandalf, the general manager played by Bobby Moynihan, describes himself as “chilled out entertainer,” and “Lord of the Reams.” Moynihan’s Gandalf is a dead ringer for Michael Scott, the eccentric Dunder Mifflin manager.

Gollum, played by Taran Killam, wears nothing but a necktie and khaki shorts, clearly still Baggins’ nemesis, and viewers of the comedy will recognize his character loosely as Gareth Keenan (or Dwight Schrute). Throughout the skit, Gollum suffers through “tricksies,” including when the One Ring appears in a mold of Jell-O.

Freeman’s SNL debut put his comedic genius on display, and a variety of other clever skits, including a partially improvised opening monologue, almost made us forget The Hobbit isn’t a comedy.