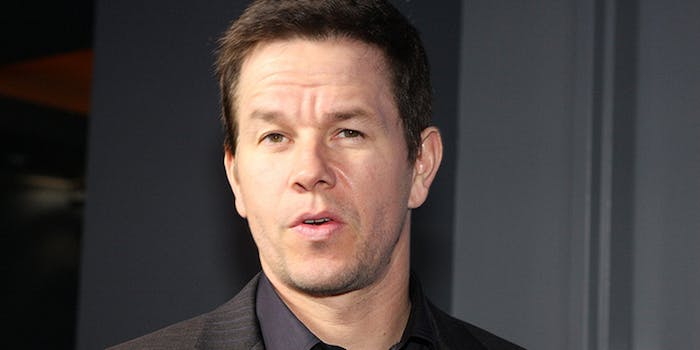 "The Mini is getting parted out," he says. "And Mark Wahlberg still hasn't written me back."

Any Craigslist ad that blames Mark Wahlberg for a perceived injustice is going to be Internet gold. That’s how the missive of one Georgia man attempting to sell his silver Mini Cooper for parts begins. He states that he watched the 2003 remake of the heist film The Italian Job, and totally bought Wahlberg’s badassery. And also a Mini Cooper like the one featured in the film:

So I’m just sitting there, watching ‘The Italian Job’, drinking my IPA, wondering what it is Mark Wahlberg does all day when he’s not filming. I like to think he’s a really nice person with good taste in red wine. About 3/4ths of the way through the movie I get this voice in my head: “BUY A MINI COOPER!” “SELL YOUR VW AND BUY A MINI!” “MINI COOPERS ARE SOOOO HOT RIGHT NOW!” Straight to the dealer I went and bought this here silver mini. “‘Coopers are soooo hot right now” the salesman told me.

He doesn’t specify when “right now” was, but he does go on to explain the beginning of his Mini Cooper’s demise, one week after buying his dream car. His narrative style keeps you on the edge of your seat, much like the plot of The Italian Job. In this scene, our protagonist is running late for work, and remembers he’s basically Mark Wahlberg driving a Mini Cooper in The Italian Job:

Right then and there, I hit a hard left by that fantastic local organic fair-trade free-range grass-fed coffee roasters and realized my skinny jeans were just a little too skinny and vintage; I couldn’t hit the clutch pedal right and slipped out of gear, my limp wrist couldn’t turn the steering wheel fast enough to break the fishtail I was going into, my feathered hair went into my eyes and I couldn’t see the road! Boom. Hit a fruit stand. If only life were like a Michael Bay movie, the ‘Cooper would have sailed right through, and I’d have kept speeding down the street, preferably with Mark Wahlberg at the wheel and me in the passenger seat. Mark Wahlberg could have made that hard left by the coffee shop, no prob. And why is there always a fruit stand!? You never see fruit stands except when there’s a car going way too fast down the road.

He also provides several photos of the exterior and interior of the vehicle, as well as this work of art, for context. 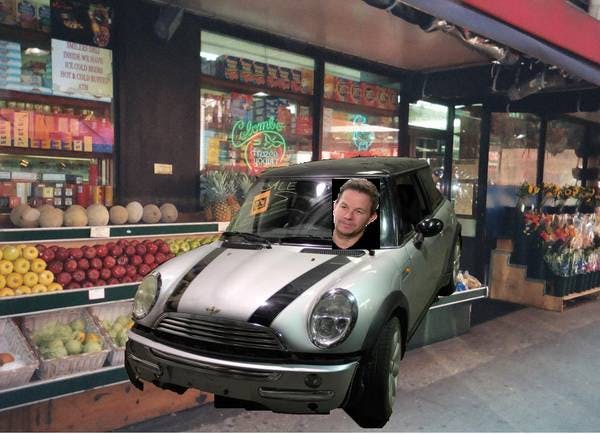 
Ah, the death of a hipster’s dream. In addition to scrap parts, he also offers a cautionary tale about material excess and hero worship. And if you’re going to emulate Wahlberg in any movie, obviously make it Michael Bay’s 2013 masterpiece Pain & Gain.