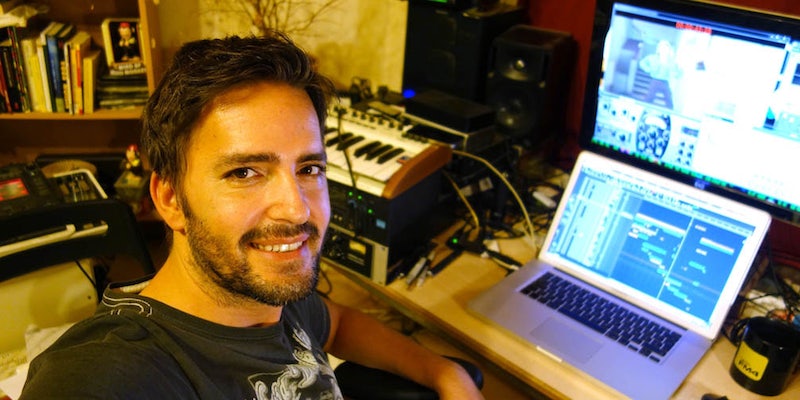 Meet the man behind your favorite musicless music videos

In his spare time, Mario Wienerroither guts iconic music videos of their soundtracks. But it's not because he hates music. He loves sound.

In his spare time, Mario Wienerroither spends hours gutting iconic music videos of their soundtracks. But it’s not because he hates music. He loves sound.

In a YouTube series called Musicless Musicvideos, Wienerroither records and mixes new audio for popular music videos that comprises the shuffles, knocks, and sneezes of quotidian life. He works from a sound library that he’s spent years amassing, and the results range from humorous to disturbing and everywhere in between.

As a sound designer, editor, and mixer, he spends hours roaming the streets of his adopted hometown of Vienna, Austria, looking for the perfect spot to record footsteps, handclaps, or just a rustle of fabric. Those sounds go into his personal library of sound effects for future use in commercials, films, and, of course, his Musicless Musicvideos.

Wienerroither, who studied audio production in Salzburg before moving to Vienna eight years ago, first hatched the idea for Musicless Musicvideos when he accidentally saw the video for Queen’s “I Want to Break Free” with the sound muted. Something about the video’s domestic scene, with the band members vacuuming and doing the dishes in full drag, got him thinking about what all those activities would sound like without Queen’s music.

“That was the vital spark,” he says. Inspired, he isolated the song’s vocal track and meticulously added layers of sound effects, from the video’s opening alarm clock and vacuum cleaner to more subtle effects like tapping feet and the rustling of a newspaper. “But I thought about uploading and sharing that thing only just a year ago.”

The Queen video was meant to be a one-off, but he got so much positive feedback that, in December of last year, he decided to start posting new videos as regularly as his professional schedule permitted. The breakthrough came with his third clip, a musicless version of The Prodigy’s “Firestarter” that racked up over a million views in just 33 days.

Since the “Firestarter” video was shot in various underground tunnels, Wienerroither was able to really show off his talent for adding just the right amount of echo and reverb to make his sound effects match the space. He also hit his stride satirically, drowning out singer Keith Flint with the roar of a passing subway train and punctuating his trademark head-flails with sneezes. No one who’s seen Wienerroither’s parodies will ever be able to watch a Prodigy video again and not think, “Boy, that Keith Flint sure has bad allergies.”

A typical Musicless Musicvideo takes Wienerroither about nine hours to produce: three hours to record and assemble his sounds, and another five or six for “brainstorming, drafting, editing and mixing, adding effects, deleting, editing again.”

He learned by trial and error which videos lend themselves best to going musicless. “The harder the artists try to look cool,” he explains, “the funnier or [more] unsettling it gets in a musicless video.” He also looks for videos that jump frequently between different locations, so he can “play around with atmospheric sound changes,” and he prefers older videos that offer some kind of human dimension or narrative element. “That’s the problem with most of the newer music videos. They look great, but that’s all.”

Wienerroither says he makes “98 percent” of all sounds in his videos from scratch, only resorting to foley libraries as a last resort. (Foley sound effects are those everyday noises you hear all over film and television soundtracks, like doors opening and car engines revving; many of the most common ones are licensed from sound “libraries” and used over and over again.) All human vocal sounds, from grunts and sighs to more dramatic yelps, laughs, whistles, and, yes, sneezes, Wienerroither does himself. “Since no one complained about those spastic human noises, I now use them kind of as a Musicless-branded feature.”

When he’s not creating Musicless Musicvideos, Wienerroither works similar sonic magic for German and Austrian TV commercials through his company, Audiobakery. For one commercial for an Austrian bank, he built musical instruments out of credit cards, then mixed their sounds together into a massive jam session with over a dozen musicians. For another, he recorded various objects hitting different floor surfaces, then mixed those sounds together into a sprightly dance track. In a “making-of” video for the spot, you can see Wienerroither at work, happily setting up microphones around Ping-Pong balls and using a mop bucket to generate more resonance as he slaps a wooden floor.

He’s also begun tackling a new pet project: “Silentless Movies,” in which he adds sound effects and even bits of dialogue to films from the pre-talkie era. “Since nearly no one watches silent movies anymore, I thought this would be a good way to make them somehow attractive for a younger audience again.” He had hoped to start with a Charlie Chaplin film, but switched to the classic vampire film Nosferatu when the Chaplin estate wouldn’t approve his alterations. Complete with creaking coffins and horrified gasps, Wienerroither’s condensed, four-minute version of Nosferatu works as both parody and homage.

Last week, Wienerroither released what may prove to be his most successful Musicless Musicvideo yet: a send-up of David Bowie and Mick Jagger’s “Dancing in the Street” that crossed the million-view threshold in less than four days. The original video’s abandoned-warehouse setting and goofy dance routines made it a natural for the musicless treatment, which features catcalls, a passing train, plenty of Wienerroither’s trademark “spastic human noises,” and a well-timed Mick Jagger belch.

Wienerroither spent over two hours recording just the scuffling footsteps that accompany Bowie and Jagger skipping and dancing down the video’s deserted dirt road. “I’m very into details,” he explains. “I could talk hours about the mixing and mastering process [alone]. How I treat the sounds is the key element that makes the musicless videos work.”