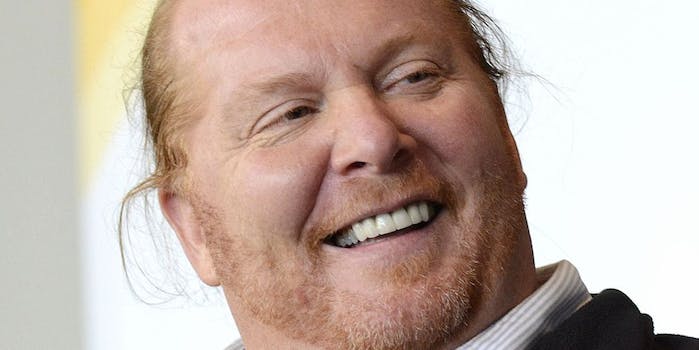 At first, it seemed the show insisted on denying its foodie heart.

After the first episode of Hulu’s new webseries The High Road With Mario Batali, we confess we had more than a few questions—not least of which was: Will this get better? Now, we might have an answer.

Viewers have to wonder: Why is it shot in black-and-white? I suspect it’s to elevate Batali’s conversations with celebrities; exchanges that were possibly interesting in their full form but after editing, amount to little more than glib 20-second soundbites in various black-and-white NYC locales. It’s ostensibly meant to tell us that this isn’t Batali the chef that you are watching but Batali the facilitator of discussion—and that this discussion is more important than the tasty stuff you were expecting to see.

Which might be fair enough if the program wasn’t ultimately food tourism after all. But it is, and that is frustrating. Do they not realize that now, on top of being unable to taste or smell anything, we can now barely see the food? At a shuffleboard club in Brooklyn, Batali and his first guest George Stephanopoulos are brought a platter of black-and-white snacks that, for all we know, is a selection of dice and piano keys. The two make all the right noises, but it’s like listening to a dinner party through a wall; robbed of that vital sense, we feel removed from their experience. Hell, you can’t even pick out Batali’s trademark orange Crocs.

This denial of its foodie heart is also to blame for the show’s odd first guest. Why else launch with a pair that don’t seem particularly interested in each other unless you want to make a futile point that this isn’t about food? As they travel around on a double-decker tour bus, Batali works hard to look interested in answers to questions like “what’s next for news?” and “what’s next for George Stephanopoulos?” while his subject smiles but has a look in his eyes as if he’d rather be elsewhere.

It’s a misstep, and one that is highlighted by the delight that is the second episode featuring chef Gabrielle Hamilton. The change in Batali’s demeanor is stark—suddenly, as he grasps he is on the same wavelength as someone, his eyes are a-twinklin’ and he re-emerges with that great, garrulous, and generous charm that booked this gig in the first place. It doesn’t matter that you can barely make out the oysters that he and Hamilton slurp at each other in the whispering gallery at Grand Central; their enjoyment is contagious.

Moments like this bode well for the rest of this weekly, 12-part series (as well as Dailymotion’s upcoming Feedback Kitchen). The future guest list is mostly from outside the food sphere (although it seems Anthony Bourdain, Frank Bruni, and Rachael Ray will be making appearances), but if the focus remains on Batali’s passion, then stand by to watch him sparkle.