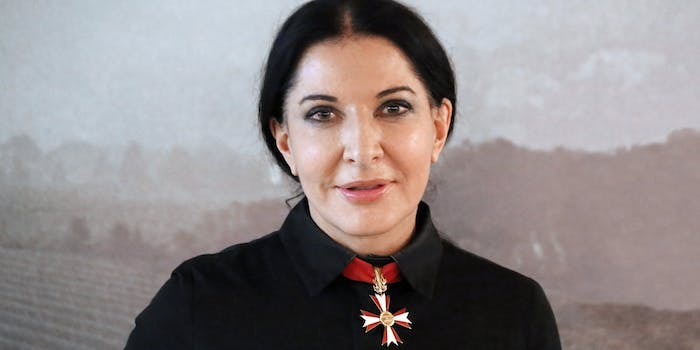 Abramovic's latest performance in London keeps the phones and cameras out.

I was caressed by a world-renowned artist last week.

“Breathe,” she murmured as she stroked my shoulders, “relax and breathe out.” Her hands lingered on my back for a minute before drifting away, leaving me seated, eyes closed, surrounded by strangers in the middle of the Serpentine Gallery.

I was at a performance of 512 Hours, the new exhibition from legendary performance artist Marina Abramovic, at the central London gallery.

Abramovic has produced what she claims is her purest, most “radical” performance piece yet, drawing in the audience to directly participate in the creation of a work that questions the line between art and space. What this means in practice is that she’s spending three months in an empty art gallery telling visitors to do whatever she likes—and thanks to the pulling power of her name, people are literally queuing up outside the door to play a part in her surreal bestiary.

Technology is strictly forbidden—phones, cameras and recording devices of all kinds are to be left in lockers, leaving visitors free of tech’s distractions, free from connection to the outside world, free to immerse themselves in the performance. (If they ignore the official cameramen recording everything.) “Our life is so busy now,” the Serbian-born artist has said. “Because of all the technology our concentration is a disaster case. Life is short, art should be longer.”

Upon entering, a black-clad assistant gestured to me. Taking my hand, we treaded silently around the gallery, slowing to an ever-more sluggish pace, before reaching a total standstill. I was bidden to be seated, where I was to stare at a yellow sheet of paper on the wall for—well, for as long as I could manage. Each wall of the main room had different colours: red, green and blue, too—and compliant visitors perched in front of them, gazing into the uniform technicolor emptiness.

Elsewhere, visitors had been asked (commanded? No-one ever said no) to engage in other activities: Some slumped in chairs, wrapped in blankets; some walked around the gallery backwards, navigating their paths with hand mirrors; other still stood dead still, eyes closed, facing the walls.

Though the show was spartan in the extreme—beyond the occasional chair, and the colored squares, the gallery was stripped totally bare—the Guardian reports there is “the promise of furniture to come.”

The performance entails elements of voyeurism, and probably deliberately: There is no meaningful boundary between spectator and participant, visitor and artwork—you are invited to observe and be observed by others. Uneasiness creeps in at times, as you stare intrusively at immobile strangers conforming to Abramovic’s will—or they stare at you.

Since the 1970’s, Abramovic has been exploring the relationship between audience and performance. She’s increasingly known as the “grandmother of performance art.” If you’ve ever been subjected to trite second-year art student’s performance piece, chances are it was inspired by her legitimately revolutionary work.

In Rhythm 0, performed in 1974, Abramovic presented herself to her audience with a table of objects in front of her, totally at their mercy. Her clothes were torn, she was stabbed with rose thorns. One visitor even loaded the gun provided and pointed it to her head before being stopped by another. When Shia LaBeouf let people read mean tweets to him in his February 2014 “performance,” #IAMSORRY, it was nothing but a pale imitation of this.

Back at the performance, some seemed to take things one stage further, apparently unbidden—sitting prone with the colorful sheets pulled over their heads, or standing bent over as if trying to touch their toes, for twenty minutes or more at a time. Had they been asked to do this, or were they doing it of their own volition?

The weird scene raised a range of questions. Was this artistic performance, or performative? Did visitors acquiesce to Abramovic’s every request because of the power of the piece, or because of her prestige? Was the significance of her name creating a weight of expectation that shaped the subsequent spectacle? And did it matter?

Whatever your thoughts on the art itself, Abramovic’s unwavering commitment to what she calls her most “radical” work ever must be respected. The artist is—at 67—working intensively, 8 hours a day, 6 days a week, for 3 months straight.

The contemporary art world is an ugly place. Distorted by monstrous, multi-million dollar price tags, historic works are rapidly becoming an asset class traded on the basis of absurd speculation rather than any real merit. Britons are lucky enough to enjoy free art galleries and museums throughout the capital, but owning a piece of art history is, for 99.9 percent of people, an impossible dream.

In this context, Abramovic’s utterly transient work, with no accompanying merchandising, memorabilia or even publicly taken photos to memorialise it, is oddly appealing. It may have been the artist’s celebrity that drew the queues from 5.45am, but the her vision has managed to produce a work that is both reliant and upon and belonging to the people—like nothing else today.

I ended up spending two hours at the gallery, much of it sitting with my eyes closed, without really meaning to. I reemerged onto Hyde park and the glorious sunshine disorientated, and slightly anxious about all my missed cellphone notifications—but certainly not dissatisfied.