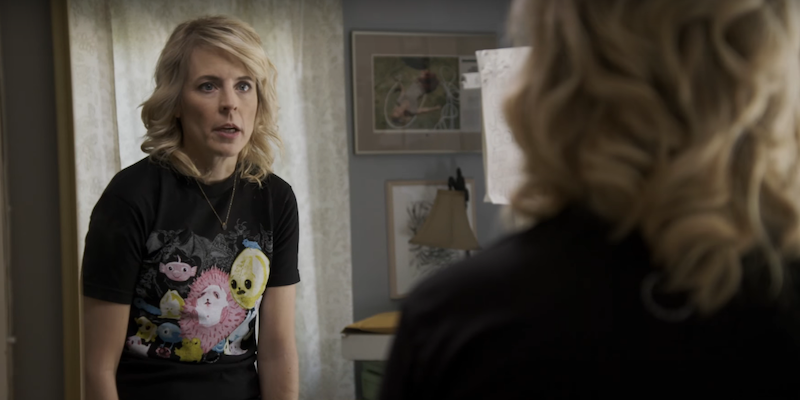 Bamford swings for the fences with a wildly inventive Netflix standup special.

In her new Netflix comedy special, Old Baby, Maria Bamford addresses herself before the audience. Her first set is in the mirror, and she finds a parallel between the genocide documentaries that Netflix keeps suggesting and Say Yes to the Dress: Atlanta: “It’s very similar to a genocide documentary in that no one is learning from history,” she says.

Old Baby, available to stream Tuesday and directed by Jessica Yu, is a special only Bamford could produce. It’s segmented into standup sets in living rooms and bookstores; on sidewalks; and in front of her husband, artist Scott Marvel Cassidy. With no traditional stage, Bamford is able to fold her natural surroundings into the sets. She discusses making it in Hollywood and the struggle of true love and acceptance next to a fluffy tree, which she later hides behind. That scene segues into a living room, as Bamford enters like it’s a sitcom. It’s two Marias, separated ostensibly by one wall.

On her Netflix show Lady Dynamite, Bamford tries to get back into comedy after a mental breakdown: She told the Daily Dot last year that she wanted “it to be a real representation of a mental breakdown while being funny in the way that I find things funny.” Old Baby feels like a natural continuation of the show—and 2012’s The Special Special Special, which was performed for an audience of her parents. Themes of love, mental health, and the entertainment business return, but there are new bits as well, like trying to tell someone that you truly love them while using a Snapchat filter.

In the latter half, Bamford gets back on a traditional stage and discusses her mental health in more detail. There’s also more focus on her marriage. It’s obvious her relationship with Cassidy influenced her comedy in a positive way, and an early scene in which he smiles lovingly while she works out material grounds this. She impersonates her mother and mother-in-law in conversation, but stops when it gets too “one-woman show.”

The absence of traditional punchlines and structure could be risky for a lesser comic, but Bamford is deft at balancing extended fart noises and musings about her brain. The journey from mirror to stage isn’t linear, but isn’t it nice to see comedians grow across specials as people too?