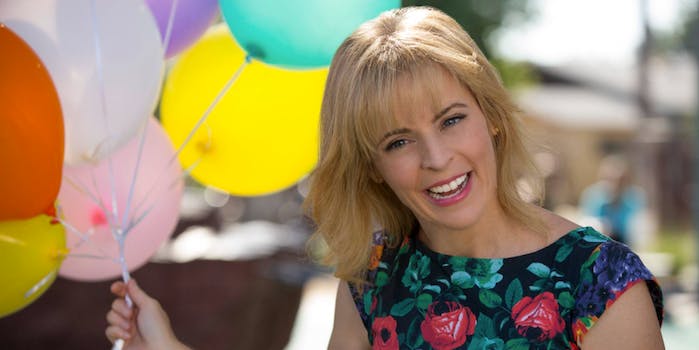 Here's how you can help, too.

There’s no doubt that Maria Bamford is one of the most unique comedians of our time. Her mannerisms and delivery are so unlike anyone else in standup that she seems to almost be creating her own genre. Judd Apatow once called her “the funniest woman in the world” and Stephen Colbert has referred to her as his “favorite comedian on planet Earth.”

Bamford has also been very public about her struggle with mental illness. She’s been hospitalized at least three time following nervous breakdowns, and her semi-autobiographical Netflix series Lady Dynamite is loosely based on her struggles with bipolar disorder.

Now the actress and comedian is helping to raise money for NAMI, the National Alliance on Mental Illness. On Tuesday, World Mental Health Day, Bamford created a GoFundMe page to help raise money for the organization, which included a video of her explaining why people should give.

“RAISE YOUR OWN ENDORPHINS AND GET THAT GIVERS GLOW” Bamford urged in the page’s description: “[B]y donating on behalf of yourself or a loved one with the mentals. I am one of the one in 5 Americans that has issues with mental health (I have the bipolar) but with my TV job, I have the resources and cash to get care. Many non-tv stars don’t. And that’s where we come in.”

The page has already surpassed its goal of $10,000, but those still wishing to donate can do that here.