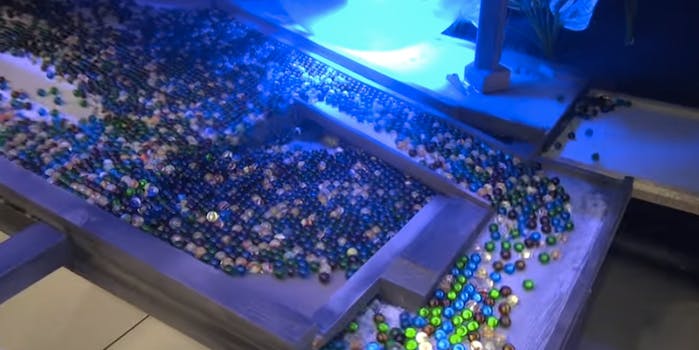 You won’t be able to stop watching marble run videos

Even cats love them.

If you were particularly good at playing Mouse Trap as a child, marble runs might be for you. But instead of trapping a fake mouse, industrious marble fanatics construct elaborate mazes to send hundreds and thousands of marbles careening for the entertainment of YouTube.

The most recent entry into the marble run fandom is an 11,000-marble track by Jelle Bakker, who has more than 12,000 subscribers.

Marble runs, which are essentially kinetic art structures, have been around for years, and the world’s largest is the 72-foot-tall Energy Machine in Hong Kong.

The YouTube community employs a mix of store-bought kits and custom designs to craft their marble runs. One of the most popular videos in the genre is Christmas-themed run, which follows a singular marble through a winding and seemingly impossible path from indoors to outdoors.

The runs are fun to watch, both for the soothing tones of the marbles clacking together and the anxiety of what will happen when marbles stack a certain way, or what twists and turns the tracks will take.

There are also inexplicable viral success stories, like the 17 million views on this 2011 clip of a child’s basic marble run setup, where commenters vote for which marble they think will make it through the fastest.

Regardless of what draws you to marble run videos, there’s no denying marbles are mesmerizing. Even cats agree.