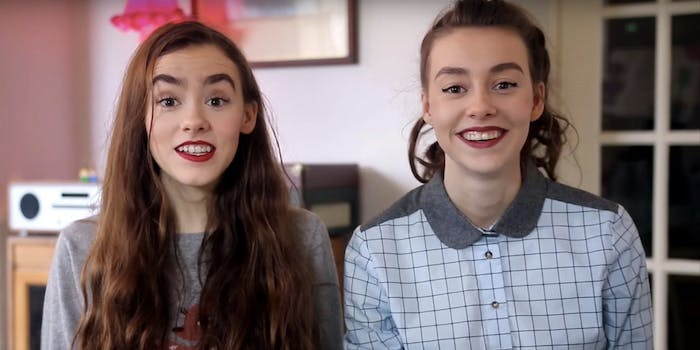 Style is a family affair with sisters Amelia and Grace Mandeville.

In the year that I’ve been watching Grace and Amelia Mandeville, I’ve become equally obsessed with their endearingly awkward vlogs as I have with the idea of raiding their enviable closets.

Grace, the oldest of the pair at 21 years old, is an actress, author, model, and disability rights activist. Amelia, 18, is an aspiring writer, obsessed with zombies, Green Day, and yoga. For every similarity (long brown hair, insatiable love of food, sense of humor, creative drive), the pair counterbalance with traits so opposite it’s a puzzle how they came from the same British family. While Grace loves to travel, Amelia prefers to stay at home for a duvet day, letting her spastic nature take her imagination around the world; as Grace dreams of a future in front of the camera presenting and acting, Amelia talks frequently in her videos about her obsession with writing a book.

A dynamic duo, Grace and Amelia Mandeville have been making YouTube a little more stylish since late 2013 when they reopened their channel and launched their lifestyle blog. In biweekly videos, the sisters talk about fashion, life, and their weekly adventures in their ongoing series “MandevWeekly.” Beetlejuice-inspired blazers, overalls, whimsical throw pillows, Oxfords, Polaroid pictures: Their blog is like falling down the rabbit hole of a real-life Urban Outfitters catalog. But instead of leaving you envious with their perfectly choreographed “I just threw this on” outfits, they leave you inspired to pursue your best self.

Their videos are pure entertainment, as their sibling affection and bickering easily dissolves the fourth wall between themselves and their 53,000 subscribers. But what I find most inspiring about Amelia and Grace is the pair’s passion for nurturing confidence in their viewers. Born with one hand, Grace has made it her mission to shatter people’s preconceived notions of how individuals can live with physical disabilities. In 2015, Grace modelled for Dazed magazine, starred in the third season of The Sparticle Mystery, announced she was writing a book, and took viewers along on auditions in London. She’s a fashion icon, obsessed with perfecting her “Downton Abbey meets Blair Waldorf” style, and often creates cheeky videos addressing questions about her one-armed life. She’s helping redefine the relationship between Hollywood and physical disabilities by example as she shows her disability might be a part of her identity but it is not her whole self. And through it all, Amelia is never far from her side, speaking frequently about the journey to finding confidence in one’s own body.

Grace, Amelia, thank you for taking us along on your many adventures, and should you ever have a yard sale, please send an invite to NYC. Nothing—and I mean nothing—would keep me from crossing the pond to seek your cozy sweater and overall advice.