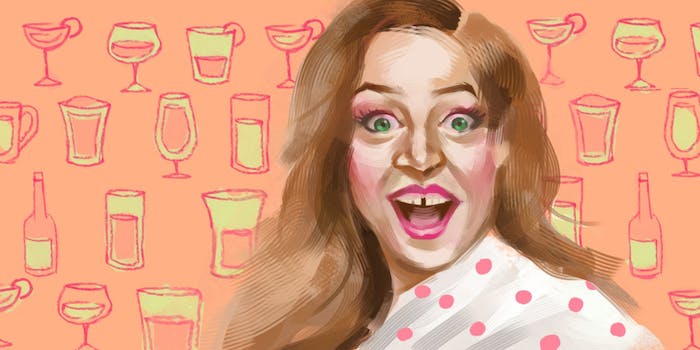 It’s chock full of stories that have only ever seen the light of day—or the dark of night—at the bar.

Mamrie Hart is the kind of person who can say “coochie juice” to a room full of suit-wearing agents and not bat an eye.

She’s not just throwing out NSFW terms willy-nilly. It’s all part of the ramp-up to the release of her first book, You Deserve a Drink, a collection of stories from her boozy youth that shares a name with her super-popular YouTube series. Hart has built a loyal following on YouTube with her You Deserve a Drink series, which uses her bartending skills to craft pop-culture cocktails for whomever is most in need of a stiff one at the end of each week. Online, she’s bawdy and unfiltered, and while she isn’t a completely different person in real life, Hart admits there are a few downfalls to your media empire being built on booze: chiefly, everyone always wants to do shots with you.

“While I love drinking and it’s my favorite thing, I can’t do shots at 1pm,” she laughed over coffee. “Unless they want me to be one of those cases that gets sad in a couple years. I think people are surprised I’m really nice, because I’m such a smartass online. That’s just my sense of humor, but on the day to day, I’m not going to be like, ‘What’s up’ and then make fun of your ass.”

YouTube persona aside, the book barely mentions the platform. The stories she tells from her booze-aided 20s are not the stories of a digital celebrity navigating her way to increasing fame, but rather of every post-collegiate trying to navigate the space between the life she’s fantasized for herself and her reality.

It’s also just extremely funny. It’s chock full of stories that Hart says have only previously seen the light of day—or the dark of night—drunkenly at the bar.

“The hard part was sitting down and thinking up stories, and realizing I have that many, and that’s terrifying,” laughed Hart. “There’s definitely ones that didn’t make it in.”

Hart spent eight years in New York City cutting her teeth on the sketch comedy circuit with shows at UCB and the Pit before leaving for Los Angeles to write and ingrain herself in the YouTube community, although that was just one of many reasons for the change of scenery.

“First, the YouTube community out here is really strong, it doesn’t really exist in New York,” she said, pausing to tell a crying baby to “get it, girl.” “Second, I was auditioning and I had to put myself on tape, and I absolutely hate watching myself. And third, I really wanted a dog and to not do winter. People’s maternal clock starts ticking at a certain age; mine went, ‘I need a dog.’” Beanz, her pup, is also part of her YouTube world, making numerous appearances throughout the series.

When she started on the platform six years ago, she was following in the footsteps of her sketch comedy pal Grace Helbig, who helped her get her first episode online. According to Hart, at the time there was a stigma in comedy circles about doing work online versus live work in the city.

“But that’s totally changed over the past seven years,” she explained. “Now I see people who didn’t know what the hell I was doing with You Deserve a Drink trying to build their own online stuff. Just as TV and film are recognizing Internet, so is live comedy.”

As a prime example of digital celebrities breaking into the mainstream, Hart sees the future of her creativity as a hybrid of the digital and the traditional. And she’s onto something: Hart will have the distinction of being the first YouTuber-turned-author to have her book reviewed by the New York Times.

“I’d like to make another movie in the vein of Camp Takota where we write in it, we star in it, we produce it,” she explained. “Our hand is in every cookie jar. I want to do traditional stuff as well. I want to be in more mainstream traditional movies I didn’t write, or things I can write but not be in. I want to do both paths, and I think naturally they’ll converge. As everyone says, traditional media is picking up on digital. I don’t think I need to come up with some new plan to bring them together. If I keep doing both, they won’t marry, but they will be common law. They’ll eventually just come together.”

With You Deserve a Drink, Hart has made the leap to the page, taking inspiration from other writers like Amy Sedaris, Chelsea Handler, and Mindy Kaling, to craft a book that mixes recipes and quick wit while staying true to her own style.

“This is the first thing I’ve ever written in first person; this is the first thing I’ve written that isn’t a script,” explained Hart, who penned Camp Takota and starred in the film with fellow YouTube heavyweights Helbig and Hannah Hart (no relation) last year. “Now that I’ve written this book, I could see how I could write a novel. In all the free time. Maybe that will be backup when I retire. I’ll slowly transition into … dirty Judy Blume.”

“Just as TV and film are recognizing Internet, so is live comedy.”

Meanwhile, for those NSFW moments in the book, Hart designed an ingenious plan for well-meaning family members who want to read her stories. She put in a safe word. Every time she mentions “rutabaga,” that’s the cue for family members to flip to the next chapter and skip the embarrassment.

“When I sat down to start thinking of the different stories I wanted to tell, I got to the point where with a large portion of them I thought, ‘imagine your mother reading this,’” she said. “That’s when I decided there had to be a safe word. I’m doing it for them, at the end of the day. I hope [they’ll use the safe word]. I was a pretty good kid, growing up; they should be a good parent and reciprocate.”

For now, she’s hoping everyone comes together around her book but approaches it in the lighthearted manner she intended.