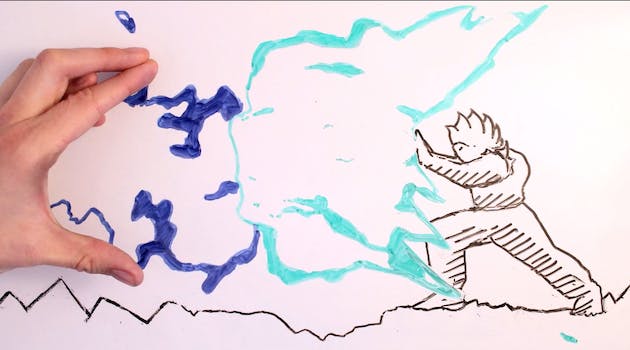 Jonny Lawrence goes head-to-head against his own creation in this thrilling stop-motion animation film.

One artist’s animation has shattered the fourth wall.

Jonny Lawrence, a U.K.-based storyboard artist, goes head-to-head against his creation in a stop-motion animation battle reminiscent of Street Fighter.

Drawn on a whiteboard, it’s Lawrence’s hand against Street Fighter’s Akuma, who’s meditating until the Lawrence starts poking around.

These two pull out more moves in a battle of resourcefulness. It’s like watching an alternate version of rock-paper-scissors set in Street Fighter. All they’re really missing is the health meter at the top of the screen.

The concept of an animator taking on his own art has already been tackled in a number of cartoons. SpongeBob SquarePants had to defeat a doodle of himself brought to life in one episode of the long-running show. Daffy Duck was tormented by an unseen animator in a 1953 short, and Alan Becker even battled a number of stick figures he intended to torment in Flash interface in a number of videos on DeviantART.

All of these times, the creator ultimately won by deleting or erasing his opponent. Unlike the other animators, however, Lawrence doesn’t use his access to a pencil or computer program to thwart his art and instead focuses on blunt force.

And left to its own devices, the animation can finally get the upper hand in this smackdown.

Now all we need is to add the hand as a playable Street Fighter character.