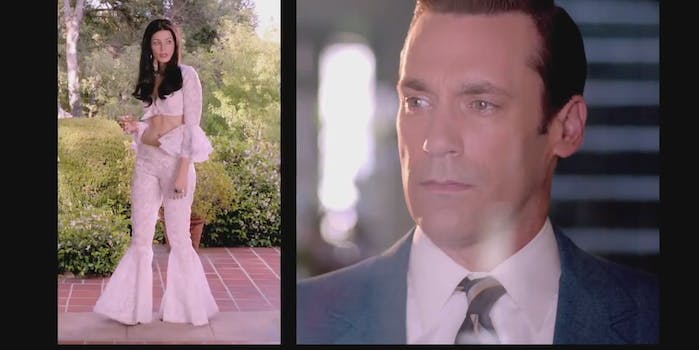 What is AMC’s new ‘Mad Men’ teaser telling us about Don Draper and company?

We're not sure how 'Mad Men' will end, but judging from this video, it can't end well.

Everyone has his or her Waterloo—even the critically acclaimed AMC period drama Mad Men.

When we last saw Don Draper (Jon Hamm) and company in May 2014, in an episode titled “Waterloo,” it was 1969, and humans were landing on the moon. At the same time as we took one small step forward, Sterling Cooper founder Bert Cooper (Robert Morse) passed on, only to appear as a dancing apparition in Don’s dream.

Cooper’s homage to his legendary Broadway role in How to Success in Business may or may not signal a major change for the troubled Draper. In the first half of season 7, our hero was shown to have feet of clay, reduced to being paid not to show up in the office. In AMC’s first teaser for the half of the season, clues about future Mad Men plot twists abound.

Given that this clip bears the title “The Party’s Over,” it’s possible we’re headed into a seven-episode stretch where each cast member meets a fate commensurate with his or her past deeds. If that’s the case, we could be headed for a bloodbath on May 17, when the series airs its final episode.