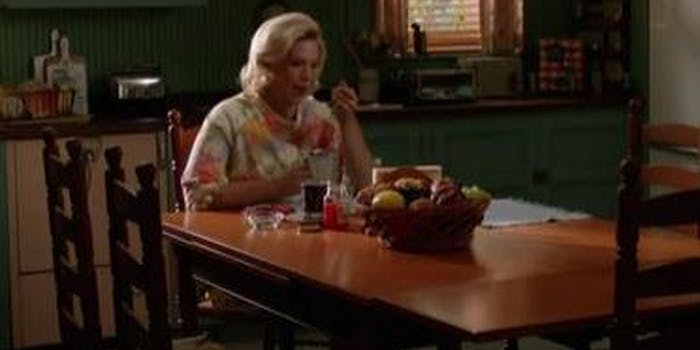 When an overweight Betty Francis appeared on screen Sunday night during Mad Men, the social media world exploded with wisecracks and criticism for the once supermodel-like character.

Now one fan is trying to turn Betty’s misfortune into an empowering moment.

The Tumblr “Fat Betty Francis” is a novelty account where an anonymous woman pretending to be Betty embraces her new wardrobe and curvy frame all while still having a little fun at the character’s expense.

“Would anyone kindly share their insight on this new medicine I’m hearing so much about called ‘Valium?’ I’m due to see a doctor again and this anxiety is overwhelming,” wrote the fan. “I could use a new ‘little helper’ since Carla [Betty’s former housekeeper] is gone.”

Betty is played by actress January Jones, who was pregnant while filming the show’s fifth season last year. Producers worked Jones’s weight gain into Sunday’s show by having her character undergo a crisis about overeating and a biopsy for a tumor growing on her thyroid.

“Incidentally, that wasn’t all January Jones that you saw,” reported the Examiner. “Producers put the actress in a fat suit to camouflage her pregnancy and used a body double for the bathtub scene.”

Yet despite the positive angle taken in the new Tumblr, that hasn’t stopped Twitter parody accounts like @_FatBetty from keeping the laugh track going.

“Another broken dining room chair,” tweeted the account. “Homemade bacon cheese meatloaf for dinner tonite. Kids, what are you having?”

However, Betty’’s weight is just as big an issue today as it would have been in 1960—maybe bigger. When it comes to our ideas about how women should look, we haven’t changed at all and that’s why Betty’s weight has made such an impression on viewers. It’s a problem we still deal with today.

But maybe I’m getting a little heavy.