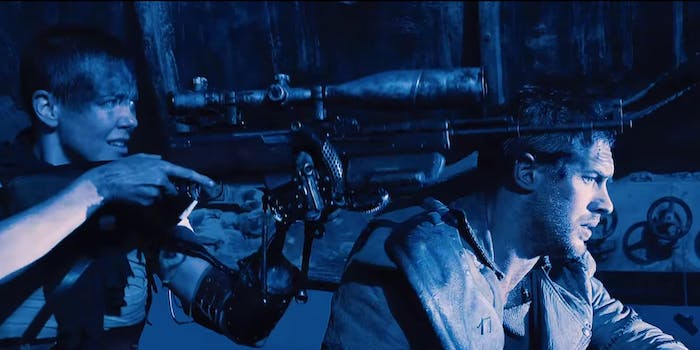 By now, you’ve probably heard an incredible amount of hype for Mad Max: Fury Road: that it’s a non-stop car chase, an unabashedly feminist thrill ride, the bane of misogynists, and a critic’s wet dream.

With only two negative reviews out of 177 raves, the film currently stands at a 99 percent approval rating on Rotten Tomatoes, and pundits are already analyzing its chances for Oscar success after its Cannes premiere generated multiple rounds of spontaneous applause throughout the film. So far the common theme among audience reactions seems to be “my head exploded.”

Why? What is it about this film that’s culling such an abnormally high amount of praise?

Vehicles as physical terrain and a chase in three dimensions 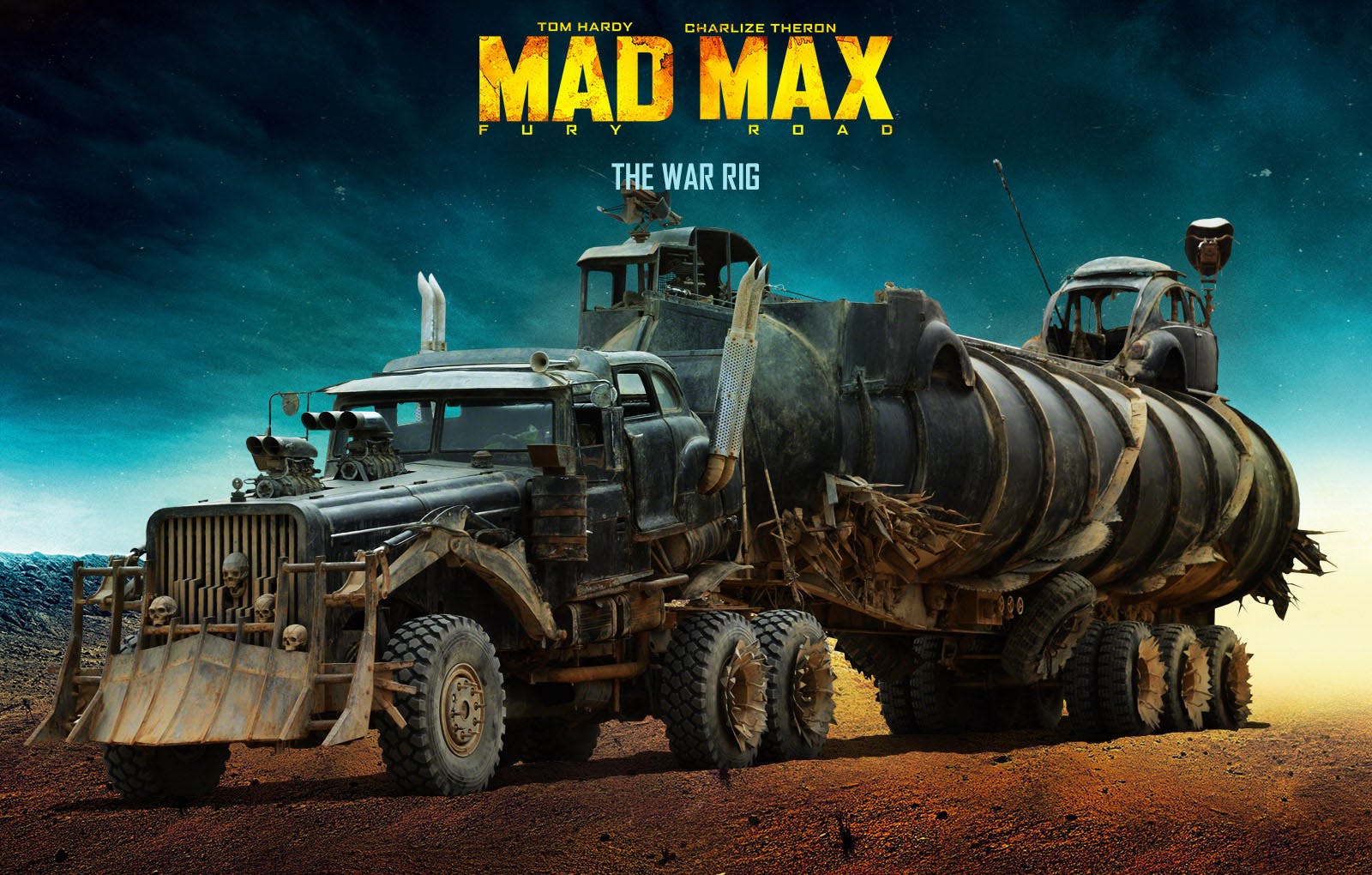 Much has been made of the brilliance of director George Miller’s decision to create such a high-concept action film, but the mechanics of how he’s done that are even more breathtaking than the fact he dared to do it at all. Miller has taken the physical tropes of action films and re-imagined each one of them.

Instead of being a linear trajectory, the standard high-speed chase becomes a complete cat-and-mouse at one point, when the pursuer abruptly becomes the pursued. Instead of having a single threat from overhead in the form of an aircraft, Miller engineers a jawdropping sequence involving tall, swaying rigs on moving cars to create the harrowing, chaotic effect of innumerable villains dropping out of the sky. The chase ultimately extends off the ground and becomes the equivalent of the kind of three-dimensional battle you’d expect from Star Wars.

And instead of a standard “fight-on-top-of-a-train” scene, Miller deconstructs and uses every part of a moving semi, while the camera moves in, around, and under high-speed vehicles with a fluidity that makes the cars themselves feel as though they’ve become a physical landscape.

Miller then systematically demolishes that landscape in an obvious metaphor, one of many metaphors in the film for the destructive nature of capitalist oil dependency. From a purely aesthetic perspective, though, it’s brilliant, because it not only gives us what we came for—opulent explosions in a fully realized, gritty Dieselpunk setting—but makes us feel increasingly unmoored. By the time the “war rig” finally gets destroyed on the last leg of the journey down Fury Road, it feels as though we’ve lost one of the film’s actual characters. (And in fact, on the Mad Max Sydney website, each of the cars received their own character posters.)

And considering how surprisingly strong our connection is to these characters, that’s saying a lot.

Logically, a film this dedicated to action should have skimped on characterization; instead, Fury Road uses its lack of development for each character as an advantage rather than a hindrance. We don’t know why Charlize Theron’s Furiosa is seeking redemption here in the desert, but the glimpses we get of the Wasteland’s starving society and Immortan Joe (Hugh Keays-Byrne), the despot she’s been working for, leave us with plenty of guesses. We don’t know the backstories of each of Immortan Joe’s escaped wives, the sex slaves whose flight catalyzes the events of the film; but at the same time we do, because the story of violence against women is universal.

Before they escape, Immortan Joe keeps them in a large sealed vault—literally a giant locked safe. After they escape, his sole concern is with recapturing the potential sons they carry inside of them, which he refers to as his “property.” The women themselves are utterly disposable at his hands—the urgency of their escape isn’t just about escaping sexual subjugation, but about regaining their agency from a man whom Miller clearly intends to be read as a literal embodiment of patriarchal rule over all women.

We don’t know why Tom Hardy’s Max carries his own Greek chorus, credited as “the Accusing Dead,” with him in his head, but we see in every wince and flinch away from human contact—wonderfully conveyed by Hardy even though he’s forced to wear an iron muzzle for the first 40 minutes of the film—that his particular brand of “madness” arises from guilt and loss. When they finally help one another to find the redemption they’ve been seeking, the emotional resonance feels like a more powerful climax for the film than any high-charged explosion could be.

The ruling class of the Citadel, Immortan Joe’s city, is a sickly, disease-ridden army of “warboys,” many sired by Immortan Joe, and raised to believe in self-sacrifice for him as a way of attaining entrance to Valhalla. One of these, Nux (Nicholas Hoult), is so friendless he gives names to the tumors that are killing him—it’s not until he’s away from the city and the “family” that he finds real emotional connection. In Fury Road, immediate bonds between characters feel real and genuine because the sense of urgency is so strong: The motivation at all times is life and death, but instead of this turning characters into savage dystopic stereotypes, it makes them fight that much harder to retain their humanity.

There is an incredible tenderness at the center of Fury Road—it’s two hours of action, yes, but it’s also two hours of characters protecting one another, believing in one another, and deciding to trust in one another because it’s the human thing to do. We expect this kind of trust to be earned over time in the standard blockbuster, but we don’t expect it to be given on principle because characters are trying desperately to retain what makes them human. It’s one of the most subtle elements of Miller’s show-don’t-tell structure, and it makes an incredibly powerful impact.

Who killed the world?

Like the original Mad Max trilogy, Miller’s dystopia is drenched in political commentary, but while the film’s feminism has recently taken center stage, its environmentalism is far more strident—not in the least because its message of a world ruined by hopeless dependence on oil comes just days after the U.S. authorized the beginning of drilling in the Arctic National Wildlife Refuge, a hotly debated issue that’s been the center of four decades of controversy. “Do not grow addicted to water,” Immortan Joe tells his parched people, “lest you start to resent its absence.” Nothing will grow in once-lush spaces in the Wasteland because Immortan Joe has pumped the water away from its sources and poisoned the soil through fracking. Fury Road is so overtly moralistic on the subject of conservation that the urgency of the chase eventually seeps into a kind of metaphor for climate change, in which humanity is racing barely ahead of its own environmental destruction.

Yet as with all Gaia-centric views of the world, environmentalism and feminism go hand in hand. The Wasteland’s fabled “green place” is home to the clan of “many mothers,” one of whom has patiently carried seeds with her for years in hopes that finally something will grow. Female solidarity is the only thing that can topple Mad Max‘s patriarchy, the endless reign of Joe and his warboys. “Our sons will not be warlords,” the escaped slaves write on the vault he locks them in—along with: “Who killed the world?”

Theron’s Furiosa is the most fully realized female action hero since Ripley. Like Ripley, she carries herself with a deep wariness, letting her actions speak for her, and rarely giving into despair. But unlike Ripley, she has aims of doing more than just surviving; her choice to help free the slaves sets off a chain of events that can only end in death or regime change.

But she can’t do it alone. The women who help her—and the sheer revelation of a narrative in which women are allowed and expected to be the primary leaders of a rebellion—are Fury Road‘s true stars. Among the harem of women Zoë Kravitz and Abbey Lee are standouts, while Rosie Huntington-Whiteley’s turn as the pregnant Splendid is memorable. But even more memorable is this scene:

At one point during Mad Max there are 12 women on screen and they all have speaking roles & none of them are talking about a man.

It shouldn’t be groundbreaking for this many women to have roles in an action movie in 2015, but it is. But Fury Road as with most of its themes, is less concerned with preaching a philosophy of feminism to you than with letting the ideals of feminism speak for themselves. In this narrative, women aren’t expendable, negligent plot devices; they’re characters with just as much agency over the plot as any of the men.

Just as important is Hardy’s choice to play Max as a subtle, quietly feminist hero. Max never objectifies the women he’s with, or views them as props for his own agenda. He helps when he’s asked to help, and when he finally speaks for any length of time, it’s not to take charge of a group that’s floundering without his help—it’s to make a suggestion, stand back, and then let the group decide.

This view of what equality actually looks like in a film is rare enough; but it’s even rarer to see it in this kind of genre material. Fury Road passes the Bechdel Test, of course; it also passes the Mako Mori Test, on at least seven different counts.

Mad Max: Fury Road leaves those mediocre measurements of gender representation—which the vast majority of Hollywood films never even attempt to pass—so far behind that it seems almost silly even to use them as yardsticks in the wake of the strength of Fury Road‘s narrative. Other films that have had this level of active female representation have been written off by critics, either as being “girly,” or as portraying those characters as weak; but Fury Road is every inch the high-testosterone, manly action movie of your dreams. And even when they show weakness, its female characters are still fully in charge of their own destinies.

It’s incredible how much that adds to the film. Mad Max: Fury Road could easily have been a gorgeous but hollow spectacle, reliant on its jawdropping practical effects and stunt work but not much else.

Instead, it’s a gorgeous, fully realized spectacle with an unapologetic insistence on allowing women to form a part of its core narrative—and it will have Hollywood rethinking its tired, male-centric narrative tropes for years to come.