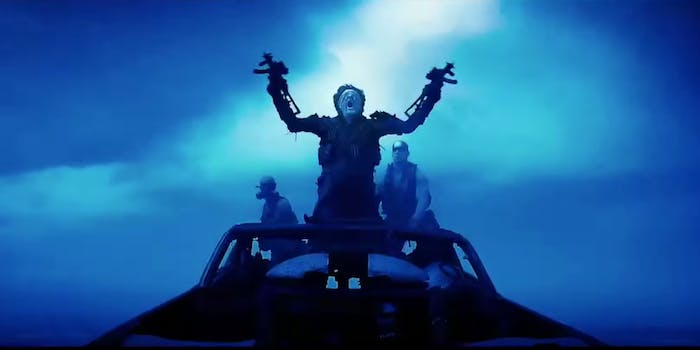 Just when you think this reboot can't get any better, the latest trailer kicks into high gear.

At this point in the life of the Mad Max: Fury Road trailer, the biggest question is whether star Tom Hardy actually says anything in this movie.

We already know that director George Miller went with a mostly dialogue-free script, which has led to previous trailers full of some of the most high-octane, pure action sequences we’ve seen in cinema since Gene Hackman sped through Paris in The French Connection.

The new international trailer, like its predecessor, doesn’t answer this question, but once again we could care less, because once again we’re too busy being blown away by the action.

It’s increasingly easy to see why the crowd at last year’s Comic-Con went totally nuts over the extended version of the Mad Max trailer. There’s no lizard-eating in this particular trailer, but there is an ever-expanding cast of disreputables who look like they stepped off the latest runway show at the Capitol. The original Mad Max, along with Frank Herbert’s Dune, pretty much defined futuristic wasteland dystopia in the ’80s, and it looks like Miller has spent the last three decades thinking long and hard about how to keep that original aesthetic by transforming it into something that almost smells like the future. The harsh colors, the shaved heads, Charlize Theron’s gang of female scavengers, and the gleefully manic pursuit through the desert by a team of villains almost have that covered.

But the kicker is that even in this trailer we can see the effect of this lifestyle on Max. Tom Hardy’s wordless transformation from the opening shot, when he gazes at the viewer with a look of startled, wide-eyed vulnerability, through the subsequent frames where he’s gagged, forced to fight back, and become the vigilante himself, show us the “Mad” happening to Max against a backdrop of—what else?—Verdi’s Dies Irae, in one of the few times in trailer history its use has felt validated by the subject material.

Just a few more months til this film’s May 15 release, and we can all welcome our new crazed, skull-flaunting, orange-soaked desert overlords.