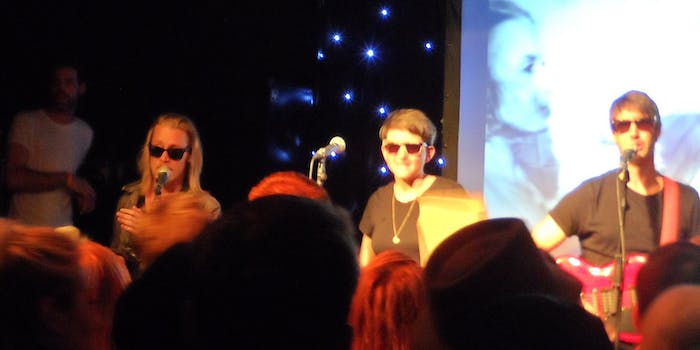 "Why are you throwing these? I’d rather drink them!"

Apparently, U.K. residents aren’t a fan of pizza—or at least not 1990s child actors who sing about it.

Macaulay Culkin’s band Pizza Underground, which pays homage to the delicious food through Velvet Underground parody lyrics, may have indeed struck a chord with American audiences and the Internet alike. However, when Culkin and his fellow bandmates performed their set in Nottingham, England, the response was colder than, well, a leftover pie.

According to Independent.ie, audience members threw full pints of beer at the performers. Culkin attempted to play it off, saying, “Why are you throwing these? I’d rather drink them!” He reportedly then tried his best to stagger through the setlist.

Eventually, it became clear that, in terms of positive reception, this performance would be less of a Home Alone and more of a Getting Even With Dad. Thus, only 15 minutes (and a steadily-growing pile of debris) into the show, Culkin walked off stage.

“That’s the end of the show. Good night,” he said before disappearing backstage.

Those present took to Twitter to further complain about the show.

Oh dear. It was all going so (kind of) well until Macauley Culkin of The Pizza Underground got covered in beer. #d2dfest #WalkedOff Stage

It amuses me the Pizza Underground got booed off stage.. What did you really think was going to happen Culkin?

Despite the chilly reception, Pizza Underground kept it classy, thanking those in the crowd who didn’t drench them in beer.

Thank you so much Nottingham and dot to dot. Sorry that a couple people ruined it for everyone.

So, is this just one bad show for Culkin? Or is Pizza Underground simply becoming overcooked?