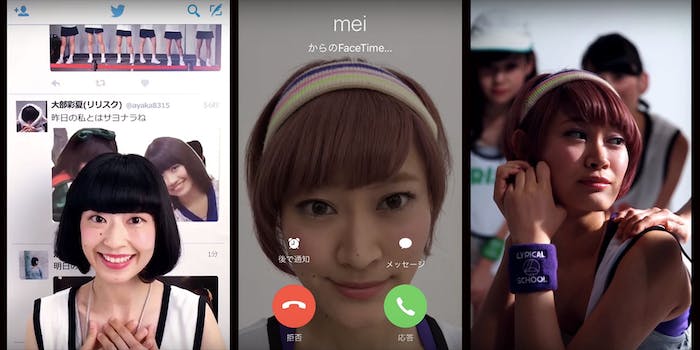 The opening seconds of Japanese pop group Lyrical School’s video for “Run and Run” might seem strange—but only if you’re watching on a PC. It’s meant to be watched on a smartphone, and the reason why soon becomes clear: The six members of the outfit seemingly take control of the viewer’s iPhone, seamlessly swiping between apps like FaceTime and Vine, all played out to scale.

Over the past few weeks, Lyrical School have been getting attention in their home country (and a fair number of looks from abroad) thanks to the video. It has won them time on Japanese news websites and left morning TV show announcers slack-jawed at the concept. To date, it has over 315,000 views on YouTube, far and away the most-viewed video online from the rap-pop outfit that formed in 2010.

But this isn’t just a music video going viral and bringing a group working in relative obscurity wider looks domestically and beyond. Lyrical School’s smartphone-centric video highlights a shift in how people in Japan listen to music, away from traditional mediums and toward smaller screens.

Many Americans see Japan as a high-tech utopia, loaded with robots and bullet trains. Yet a similarly prevalent sentiment—at least when it comes to U.S. media—is that Japan isn’t up with the times. There is no shortage of English-language stories about how the island nation still uses fax machines and buys CDs. The latter, in particular, pops up seemingly every year as North America and Europe increasingly embrace streaming music services.

Physical media does make up a higher-than-usual share of Japan’s music market—the International Federation of the Phonographic Industry’s recent annual report on the global music industry reports that 75 percent of Japan’s music industry’s revenue comes from physical sales—but that’s changing. The same report notes that physical sales declined by 3 percent in 2015, and that comes after a year of steady drops in overall music sales. Yet Japan actually saw its total market go up by 3 percent last year, thanks to the rise of digital platforms.

Last year, Apple Music and messaging application Line’s own Line Music debuted in Japan. They weren’t the first such services in the country, but they were the flashiest, debuting with huge advertising campaigns dwarfing what came before them. Although streaming is still a fledgling industry, it is starting to make inroads. Meanwhile, a poll conducted by digital company CyberAgent last year found more and more people are turning to video sites such as YouTube for content, especially those between the ages of 15 and 19. And smartphones, especially the iPhone, continue to do brisk business.

Lyrical School’s “Run and Run” isn’t just a hit thanks to its quirky concept—though let’s not ignore the charming homemade Twitter cut-out featured in it. It’s one of the first videos to make the most out of the same device a large chunk of viewers will see it on. Previously, singer/songwriter Aimyong released a clip in 2014 based around the Line messaging app, one where a protagonist harasses a love interest and eventually sends death threats (alongside cute stickers). The novelty of watching a rapping sextet commandeer Twitter certainly helps get attention, but Lyrical School’s real genius lies in taking advantage of a smartphone.

Beyond using daily apps in eye-catching music videos, Japanese musicians are also realizing the full potential of YouTube as a home base, much like in the rest of the world. Artists such as Maco and Goose House built big fanbases on the video service, and today have landed major label deals that, ironically, allow them to sell CDs in major retailers. Some of the country’s most popular songs, meanwhile, gain steam online: One of 2016’s breakout hits in Japan is by a comedy duo and a team of dancers that has over 28 million views online.

Lyrical School’s recent viral spread underlines this digital shift in Japan—and shows that the country’s music industry isn’t totally encased in ’90s amber. It’s reminiscent of videos by artists such as Arcade Fire and OK Go, interactive numbers that basically took over a user’s Web browser (Japan had at least one too). Yet those experiences were primarily ways to highlight technology—in those examples, Google Chrome—while “Run and Run” simply adjusts to the realities of 2016.